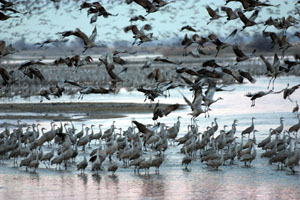 • Largest spring migration of Sandhill Cranes in the world, more than 500,000, with annual visits by the only wild population of the highly endangered Whooping Cranes numbering less than 200 individual birds.
• More than 10 million waterfowl migrate through Nebraska annually with many species nesting within the state. This includes Trumpeter Swans, White Pelicans, and a diverse variety of ducks and geese.
• At least 36 species of shorebirds travel through the state during their migration between the tropics and the Arctic Circle. Many species find suitable nesting sites along the thousands of miles of shorelines of scenic rivers, lakes, prairie potholes, wetlands and wet meadows. This includes several endangered species such as the Interior Least Tern and Piping Plover.
• The Missouri River Valley is a major migration route for eagles, hawks, and geese, with tens of thousands of these birds traveling the river corridor each year. Many woodland birds such as warblers and tanagers use this flyway.
• The Lake McConaughy area has a bird list of nearly 350 species, easily the largest number of species for any area in the Great Plains, and second only in numbers and diversity to the Gulf Coast of Texas.
• Nebraska has ten unique ecological regions which support a diversity of both eastern and western bird species.
• Across the four seasons more than 450 species of birds have been identified in Nebraska.

Nebraska Metro Birding
In the heart of the Central Great Plaines of Eastern Nebraska is the Missouri River Flyway. This is a major migratory corridor for many woodland warblers and other riparian species of birds. Hundreds of thousands of geese travel the Missouri River Valley annually along with thousands of hawks and the second largest concentration of Bald Eagles in the Continental U.S. Nebraska’s Metro Birding Region is at the confluence of two major rivers, the Lower Platter River and the Elkhorn River, into the Missouri River. This heavily wooded area of Nebraska is combined with some of the state’s largest tracks of remaining tall grass prairie. Truly a birders paradise …(more)

Chicken Dance Trail
Birding adventures in southwest and south central Nebraska. Over 10 million geese and waterfowl and close to 300 different bird species can be found at various times of the year in Nebraska’s Loess Hills, Sandsage Prairies, Rainwater Basins, Republican River Valley, and numerous lakes including the Medicine Creek Resevoir.

Nebraska Birding Trails
A list more than 400 birding sites on public and private lands that stretches nearly 500 miles across the Great Plains of Nebraska. Birding enthusiasts will discover the hospitality of Nebraska’s many working guest ranches. Enjoy relaxing in the rural settings of a quaint bed and breakfast. Or explore the many historic state parks that offer full service accommodations to primitive camping. All this while taking in the abundant birding opportunities in Nebraska. Down every county road, and around every river bend, you’ll enjoy and be awed at Nebraska’s rich birding heritage.

Birds of the Great Plains
The ultimate field guide for anyone wanting to watch birds in the Great Plains of Nebraska. From the state’s eastern riparian areas to the buttes and canyons of the Pine Ridge in the panhandle. From the scenic Niobrara River and Valentine National Wildlife Refuge in the north to the Rain Water Basin in the south. And across the 19,000 square miles of Nebraska’s Sandhill Prairies in the center of the state, you’ll have the most comprehensive field guide to the birds you’ll encounter…

Why Nebraska? …have a look

Heron Haven
An Omaha spring-fed wetland sanctuary offering nature trails and a boardwalk that are open to the public every day, free of charge. The sanctuary features one of the last oxbow wetlands of the Big Papillion Creek, and despite its location within Omaha’s city limits, it provides visitors a peaceful refuge in which to study, observe, or merely enjoy the natural environment. So, take a walk on the wild side! Come and visit Heron Haven, whether for a quiet nature walk, for bird watching, nature photography, or to view the butterfly garden and prairie grass exhibit.

Kick back and enjoy the peace and quiet of the pristine Nebraska Sandhills. Do some hunting, fishing or canoeing. Enjoy wildlife and bird watching across the vast prairies, panoramic sunsets and star studded nights. Or saddle up and join us in the work of an old-time cattle ranch.