The Red-bellied Woodpecker is a medium-sized woodpecker of the Picidae family. It is one of the most beautiful, yet poorly named birds that we 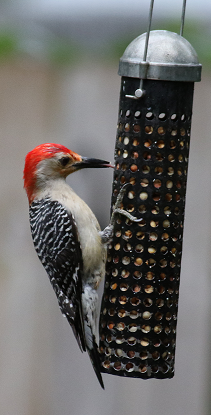 can attract to our yards. Its common name is somewhat misleading, as the most prominent red part of its plumage is on the head. Their name instead comes from the light pinkish color which runs from between the legs to near the base of the tail. This reddish tinge on the belly which gives the bird its name is difficult to see in field identification.

Adults are mainly a very light grey on the face and underparts. Both sexes have black and white barred patterns on their back, wings and tail. The adult males have a red cap going from the top of the bill to the nape of its neck. On the females however, this red cap is broken, starting on the crown of the head and going to the nape of the neck with another small patch just above the bill. The immature birds have very little or no red on their heads at all and the black barring on their backs is more grey than deep black with a bill that has a dull grey color. The Red-bellied Woodpecker measures 9 to 10.5 inches long with a wingspan of 15 to 18 inches.

Red-bellies breed in southern Canada and the northeastern United States, ranging as far south as Florida and as far west as Texas and the eastern most part of Colorado. Similar species that are rather closely related are the Golden Fronted Woodpecker, the Gila Woodpecker, and the Red-headed Woodpecker even though they all look entirely different.

In the Central Great Plains and Upper Midwest the Red-bellied is a common visitor to most feeding stations with nearby wooded areas. It appears to be more common in Southern areas where it will have two to three broods each year. In northern climates they will only have one hatching. Their breeding habitat is usually deciduous forests, woodlands, and neighborhoods with large mature stands of trees. As with other woodpeckers, they mainly excavate their nest in dead trees or in the dead branch of a tree. They may also use decayed cavities of dead trees or an old cavity of a Red-headed Woodpecker. Old stumps or snags are also used.. If necessary they will excavate a nest cavity in live trees that have softer wood such as elms, maples, or willows. They will also use man made nest boxes.

It takes the Red-bellied Woodpecker 7 to 10 days to excavate a nesting hole in a tree. Both the male and female assist in digging the nesting cavity. Once the cavity is finished and cleaned out, the female will lay 4 to 5 white eggs. After the clutch is complete both the male and female Red-bellied will share the duties of incubation with the female taking the day shift and the male at night. Incubation lasts about 12 days after which both parents will feed the hatchlings which will remain in the nest for a lengthy 24 to 26 days. Once the young have fledged they will stay close to the nest tree for several more days before venturing out. At first they will follow the adult birds around their territory watching their parents collect food for them. These young woodpeckers will remain dependent on their parents for approximately 6 weeks after which they seem very capable of taking care of themselves.

Woodpeckers mainly search out arthropods on tree trunks, with the exception of the Flickers which primarily forage for insects on the ground. Woodpeckers have a tongue that measures several inches long and is barbed and sticky on the end. It coils up in the back of their skull when not being used to extract bits of food. They will probe in the cracks and crevices of the bark and around the trunk of trees gleaning for insects and larvae. They may also catch insects in flight. Woodpeckers are omnivores, eating insects, fruits, nuts and seeds.

In southern regions Red-bellied Woodpeckers seem to prefer sweeter foods like oranges or tree sap from the wells dug out by Sapsuckers. In northern areas they will occasionally feed on orange pulp and grape jelly set out for orioles, but their main interest seems to focus on insects, peanuts, and natural ripening fruits like Mulberries which many birds enjoy. This woodpecker is among those birds which will cache food away for future use. They like to hide corn, sunflower seeds, safflower seeds, and of course their favorite, peanuts, stashing these morsels in the bark of a tree, in an old fence post, and even under shingles on a house.