When you live on the Great Plains of North America one becomes accustomed to weather extremes. Winters are cold and harsh. Summers are hot and dry. Hardly worthy of the evening news as Plains people are expected to be hardened to such conditions. But the temperatures now gripping the Central and Southern Plains are becoming reminiscent of the dirty 30’s during the dust bowl era. Although we have developed creature comforts to make life for humans on the Plains more bearable,, birds and other wildlife must endure record high temperatures as they have in the past. What are the effects of drought on birds as streams, rivers and wetlands dry up and food resources are parched under the hot sun.

Jody Daniels. This is the Platte River by Columbus, Nebraska, July 2012.

From the floods of 2011 to the drought of 2012 it is becoming evident that our weather is experiencing some huge climatic swings. These extremes are challenging to humans and the infrastructure that we have created to comfort us, move us, feed us, and provide the water we need. But it is also a huge challenge for wildlife, especially birds.

The drought that has gripped the Great Plains and Central U.S is imposing numerous problems for birds the most eminent being a shortage of insects for food. Part of the reason insect numbers are low is because many species need shallow, temporary pools of water for certain life stages. When water resources are scarce, there will be fewer insects in the air. So the lack of moisture and scorching temperatures has reduced insect populations considerably. It makes life difficult for birds that eat them. Insects provide a huge part of the food web. Anything dependent on them will have a rougher time.
Many nesting birds rely on insects to feed their young and this reduced food source can lead to a high number of nest fatalities. The problem is even greater for migratory birds like warblers, tanagers and thrushes, which only eat insects and berries. Both of these food sources will be hard to find this summer because of the drought.

While these species were probably fine during the beginning of the season I expect they are having a much harder time now that the area is gripped in a drought. These birds migrate to northern areas to breed, producing two or three broods in a season, then migrate south for the cold winter months. A drought makes nesting challenging, and birds may only be able to have one brood. Late-nesting species and birds that are trying to re-nest are having the most trouble.

Insects and berries are also the primary food source for many migratory birds especially the Neo-Tropical migrants which includes hummingbirds. These birds rely on an abundant insect population to build up enough energy to make the long flights to their winter ranges. The lack of insects is surely going to have an additional impact these birds.

Those folks who had nesting Purple Martins this year have reported an early departure of their colonies. Martins rely strictly on collecting insects on the wing and as insect populations declined with the ongoing heat the Martins moved on early in search of a better supply of food.

We have received several reports as of late July that hummingbirds have been seen at feeders but that is not uncommon. The Ruby-throated Hummingbirds begin arriving by late July with numbers increasing by the first to second week of August. The highest numbers of migrating hummingbirds occur from September 2 – 18 in Nebraska. Stranglers will continue to move through well into the first week of October.

As a rule in dry years hummingbirds will patronize hummingbird feeders more often. With a lack of rain native wildflowers produce less nectar making hummingbird feeders more attractive. However there is a “Catch – 22” during periods of extreme drought. Hummingbirds rely on small invertebrate insects as an important source of protein. With insects in short supply this year it is uncertain how that will impact their distribution on their migration south.

But reduced food resources are not the only hazard that birds encounter during periods of drought. The most basic item which sustains life, water, can become the difference between life and death. Birds need water to rehydrate as well as bathe and cool down when summer temperatures reach critical highs. Prolonged periods of drought do effect the distribution of birds. Linda and I take hot afternoon walks around Holmes Lake in Lincoln. We see a few Purple Martins along with Eastern and Western Kingbirds hawking for insects over the lake. But there is a definite absence of Dickcissels, Meadow Larks, Grasshopper Sparrows and other grassland birds.. Have these grassland birds and others dispersed to areas with better habitat? Possibly. Wisconsin which has been spared from the drought for the most part and are reporting a higher number of Dickcissels this summer from previous years.

In Texas where record drought has persisted for several years wintering ducks have declined by more than 30%. Whopping Cranes have relocated from their traditional wintering grounds to more favorable lakes to the north, and more than 10,000 Sandhill Cranes remained on the Platte River for the winter or returned after finding limited habitat in Texas and New Mexico. So it is very evident that weather patterns do affect the distribution of birds. I guess that’s why they have wings. It allows them to be extremely mobile and adjust to conditions.

Birds must replenish body water lost to respiration, evaporation and defecation on a daily basis. With an absence of sufficient water, a bird’s body raids its own cells of water, and the cells begin drying up and dying. Blood volume plummets, and the heart, liver and kidneys become inefficient.
Adult birds must leave the nest daily to obtain fresh water and food. If they have to travel greater distances to find these resources, the nestlings are exposed to sun and predators for longer periods increasing their risk of mortality. 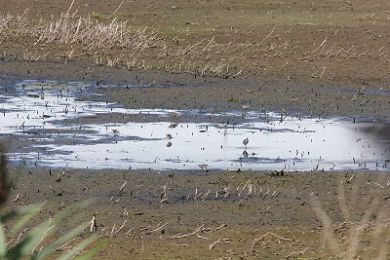 In Nebraska more than 200 bird species utilize wetlands either as a nursery to raise their young or as a stop off during migration to rest and feed. As the drought diminishes surface water bird populations become more concentrated. As geese, shorebirds and duck become more closely packed together it raises the risk of an avian cholera outbreak. First reported in the United States in the 1940s, the disease is not new to Nebraska wetlands. Although it does not impact humans, avian cholera has the potential to kill off tens of thousands of waterfowl.

Another problem that occurs with low water levels is vast quantities of lead buckshot from decades of waterfowl hunting become exposed. Shorebirds and diving ducks inadvertently consume the lead shot while feeding becoming sick with lead poisoning. As scavengers and other predators feed on these disabled birds the lead poisoning is past on and moves up through the food chain. Bald Eagles are extremely susceptible to this illness which causes brain damage, paralysis, and finally death.

Birds dissipate body heat much like a dog by panting.You have undoubtedly seen birds with their beaks open wide during hot days in an attempt to cool down. Birds do not sweat but pant much like dogs to disperse heat. This is why water is extremely important for birds not only for drinking but for giving

them somewhere to bathe. Clean feathers are just as important to a bird’s health during hot weather as they are during the frigid winter months.

A shallow water sources can provide a place for birds to drink and bathe. It can be anything from a simple pan set on the ground to a birdbath. Keep bird baths filled with fresh water and clean regularly. Since the sun promotes algae growth, try locating your water source in the shade. This will greatly reduce the number of times you bath needs a good cleaning. Adding a dripper will keep the bath full of fresh water during times of heavy usage and high evaporation. A dripper or “Water Wiggler” also creates motion in the water which almost magically attracts more birds.

This is a time when adult birds are actively raising their young and these young birds are in a developmental stage requiring substantial food sources in order to reach maturity. The fall bird migration begins in August and these migrating birds will require large quantities for food to sustain them on their journey south. And with the onset of winter resident birds will only survive the harsh frigid nights on what foods they consume during the shortened daylight hours. Birds are going to face a number of challenges finding food and water as the drought lingers on. The actions we take in our backyards providing supplemental food sources and water may be the difference between life and death for many birds. So just feed the birds! It will make a world of difference.