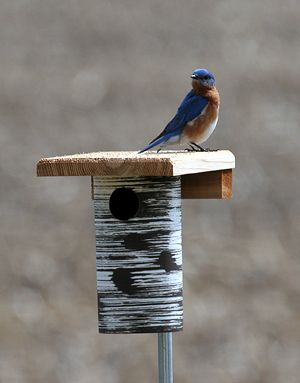 As spring approaches, bluebirds will prepare to nest and explore their natural habitats in Nebraska and across the country. Three species of bluebirds are found in North America. The Eastern Bluebird, Mountain Bluebird, and Western Bluebird. If you want to attract these beautiful ‘birds of happiness’ to your property, you should plan now to set up a bluebird nesting box. 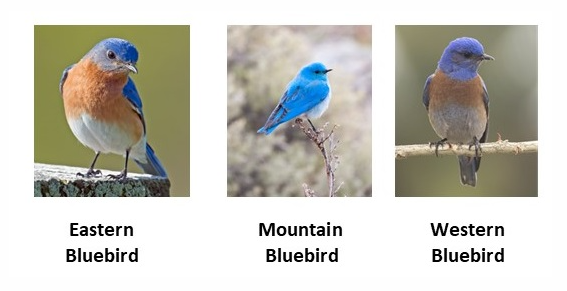 A hundred years ago bluebirds were common in most habitats, even those in urbanized areas. But the rapid increase in the population of the English (house) Sparrow introduced in the mid-1800s drove them out of city parks and neighborhoods. This introduction of the House Sparrow, an aggressive invasive cavity nester, reduced the bluebird population to critical lows. HOUSE SPARROW CONTROL

But thanks to bluebird recovery programs started across North America, bluebird populations have rebounded. There is likely a bluebird recovery program in your state or province. These grassroots groups have helped to reestablish bluebirds in large city parks and suburban areas along the fringes of heavily urbanized areas. Checkout GETTING STARTED WITH BLUEBIRDS.

Bluebirds begin their nesting activity in March and have up to three broods per season. If you want to attract nesting bluebirds, first you must have the right habitat. They prefer open spaces, such as meadows. prairies, and acreages. They are a woodland edge bird, but woodlands are House Wren habitat and precaution must be taken to prevent this persistent little wren from taking over the nest box. So it’s best to avoid the edges of heavily wooded areas.

One bluebird nest box can attract a single nesting pair of bluebirds. But to attract multiple nesting pairs of bluebirds you must locate individual boxes a minimum of 300 feet apart.  Some bluebird enthusiasts will establish bluebird trails in parks, fields, or other large areas where they can space dozens even hundreds of bluebird boxes at the recommended distance between nest boxes. If you lack that kind of space, or just want to manage one bluebird box, you can increase your chances of becoming a bluebird landlord by PAIRING BLUEBIRD NEST BOXES.

Man-made nest boxes are readily used by bluebirds provided those boxes meet specific criteria such as the size of nest box and the size of the opening into the nest box. Nest boxes should be well ventilated, and have small holes in the floor to drain any moisture that gets into the box. Most important is they have easy access to open the nest box to monitor the progress of nesting birds or evict unwanted invasive species. It is recommended using a bluebird nest boxes that have been approved by the North American Bluebird Society. Here are the most popular bluebird nest boxes –

Because birdhouses provide an artificial cavity, bluebirds will readily build their nests inside them. They’ll even nest in houses that are in close proximity to human dwellings. In that case locating your bluebird nest box on the edge of a mowed lawn provides bluebirds with easy foraging of insects on the ground. Wild Bird Habitat Stores Bluebird Nest Boxes

With all this in mind – to be a successful bluebird landlord the key is monitoring the nest box. Bluebird nest boxes should be opened and checked every 7 to 10 days. If House Sparrows are constructing a nest they need to be evicted. If a tree swallow commandeers the nest box, clean it out after they have fledged their young. Tree swallows typically only have one brood and bluebirds will use the box once the Tree Swallows have left. If when opening a nest box to see how things are going, if there is a nesting tree swallow or bluebird in the box, don’t worry. They are very tenacious and will not abandon the nest, even if they have young already hatched. They generally fly up to a tree and wait for you to leave before returning to their family duties. Checkout MONITORING A BLUEBIRD NEST BOX for more information.

When monitoring a bluebird nest box it is easy to identify if you have nesting bluebirds, or another bird using the box just by the construction of the nest. Bluebirds construct a tidy cup nest made of primarily fines grasses. Tree Swallows build a shallow cup nest but the inside of the nest will always be lined with feathers. House Wrens will pack the nest box with small twigs and sticks. The House Sparrow totally overloads the inside of the nest box with everything from grass and weeds with seed heads still attached, and about anything from string to gum wrappers. They will pack the box from floor to ceiling with whatever they can find. IDENTIFYING NESTS & OCCUPANTS IN BLUEBIRD BOXES

How can I protect them?

Nest box competition is an issue for nesting bluebirds. Not only will the House Sparrow attempt to kill the adults and smash the eggs of bluebirds as they take over the nest box, but House Wrens will spear the eggs and toss them from the nest so they can use the box. Predators such as raccoons, snakes, house cats will prey on adult bluebirds and their eggs. Insects can pose a lethal threat as well. When monitoring your bluebird nest box check for ants, mites, and blow flies. Never use pesticides or herbicides around nest boxes. If mounting your nest boxes along roadways face the opening away from traffic. Many a young bluebird leaving the nest for the first time has been hit by automobiles. If problems arise they are not difficult to deal with. Protect your tenants. Be a good bluebird landlord. Find out more at PREDATORS AND PROBLEMS

Unlike other birds, bluebirds will rarely eat seed. They prefer insects above all else, though they also supplement their diets with berries. They will readily feed on mealworms that you can purchase at most backyard bird feeding retailers or pet stores. Bluebirds have been known to over-winter if they have located a source of natural foods to sustain them such as this photo taken by Lorrie Bryant during a Nebraska snow storm. 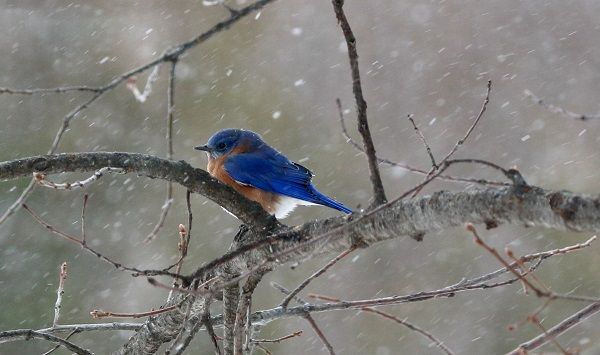 Becoming a bluebird landlord, no matter if you only have room for one nest box or for multiple nest boxes, can be very rewarding. You will not only enjoy each brood they hatch on your property, but you will be participating in the conservation of bluebirds, the bird of happiness.

FIND A BLUEBIRD GROUP IN YOUR STATE

For assistance on wild bird food and other backyard birding supplies as well as supplies for nesting bluebirds, contact Wild Bird Habitat Store in Lincoln, NE. Since 1993, we’ve been providing a variety of products for bird enthusiasts to attract, watch, and study bluebirds and other cavity nesting birds.  Call us at (402) 420-2553 to speak to a team member about your needs. Visit us online to view their available products.