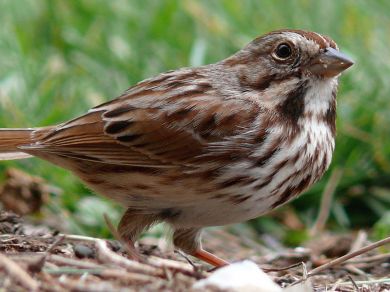 Song Sparrow – A rich, russet-and-gray bird with bold streaks down its white chest, the Song Sparrow is one of the most familiar North American sparrows. Don’t let the bewildering variety of regional differences this bird shows across North America deter you: it’s one of the first species you should suspect if you see a streaky sparrow in an open, shrubby, or wet area.

American Tree Sparrow – A plump and long-tailed sparrow that winters in backyards and weedy, snow-covered fields across southern Canada and the northern United States. Hopping up at bent weeds or even beating their wings to dislodge seeds from grass heads, they scratch and peck the ground in small flocks, trading soft, musical twitters. Come snowmelt, these small rusty-capped and smooth-breasted sparrows begin their long migrations to breeding grounds in the tundra of the far North.

Harris’ Sparrow – A large sparrow with a white breast and striking along the sides. A brown back has heavy black streaking, white bars on the wings, and a long tail. The head has a black bib, forehead, crown and nape with a pink bill. Rarely 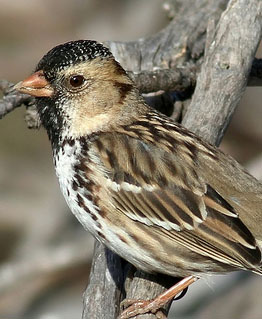 found far east or west of the middle of North America, spending the winter in the very central region of the United States. Found in hedgerows, shelter belts, fields, pastures, and weedy patches. Often seen feeding in gardens and backyards.

Dark-eyed Juncos – One of the most common winter members of the sparrow family, has a slate gray body and hood with a pure 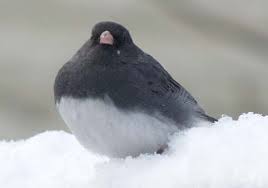 white belly. White outer tail feathers are most visible in flight. Found in undergrowth of open woodlands, roadsides, and shrubs. Often seen in backyards and around bird feeders. Many call this bird the “snow bird” as it precedes the first snows of the season.

Wingtips: Ground feeders with safflower seed and Proso millet are excellent for attracting native sparrows and other ground foraging birds. You may add a little cracked corn to the mix unless squirrels are a big problem.