For International Migratory Bird Month in Nebraska the Bobolink fits the bill as this bird is a long distance Neo-tropical migrant. They winter in the 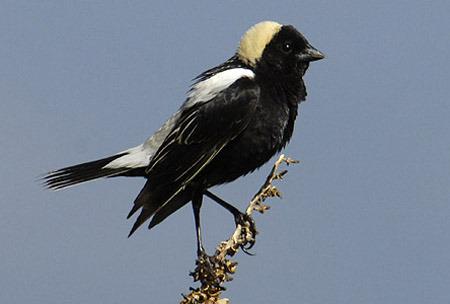 interior of South America migrating over 12,000 miles in the course of a year to their breeding territory in North America and back. They can fly up to 1100 miles in a in a single day, then stopping to recuperate for days or weeks. This is a remarkable feat for a bird that weighs roughly one ounce.

Bobolinks are also called “rice-birds” as they can be found feeding in the rice fields along the Gulf Coast once they arrive in the U.S. In Nebraska during the breeding season they are found in prairies and hay fields in Eastern Nebraska, but are more common as you move toward the prairies of Nebraska’s Sandhills. They breed throughout all of Nebraska.

Bobolinks are a lark like songbird with a large head and a short neck and tail. They are related to blackbirds and orioles with a similar sharply pointed bill. Males are primarily black except for the white back and rump and a buffy color on the nape of the neck. Females are a buffy brown color with dark brown streaks on the back and flanks. Bobolinks are 7″ in length weighing about an ounce. After the fall molt the male takes on the plumage similar to that of the female.

The numbers Bobolinks are declining due to loss of habitat. Since 1970 their population has been reduced by approximately 67%. Originally, they were found in tall grass prairie and other open areas with dense grass. Although hay fields are suitable nesting habitat, fields which are harvested early, or at multiple times, in a season may not allow sufficient time for young birds to fledge. After breeding, Bobolinks move to freshwater marshes and coastal areas to molt before migrating.

Bobolinks polygynous, with each male having several mates per breeding season, but they are one of the first species proven to be polyandrous, each clutch of eggs laid by a single female may have multiple fathers. Once a male Bobolink has established a territory the female will select the nest site among dense tall grasses. She’ll pluck a small bare patch on the ground making a small depression. She weaves a floorless outer wall of coarse dead grasses and weed stems, then lines the inside by placing fine grasses and sedges directly on the soil. When the nest is completed a clutch of 3 – 7 small pale bluish gray to reddish brown eggs, with irregular spots of brown and lavender will be laid. The female Bobolink will incubate the eggs for 14 days. After the hatch it will be another 10 to 11 days before the young are ready to leave the nest.

Both parents will feed the young. In some nests, the nestlings are fed by more than two attending adults, which possibly include multiple fathers or offspring from the previous year. The young leave the nest unable to fly, and hide in thick vegetation for a few more days 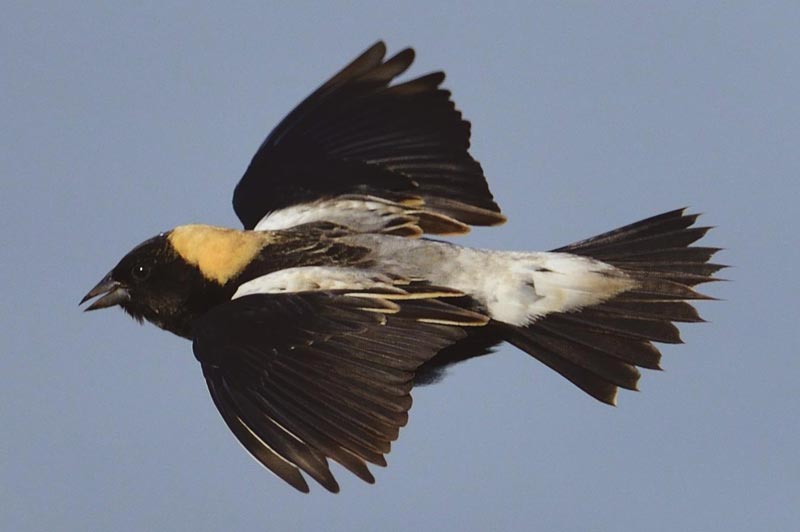 until their flight feathers have fully emerged. Families from several nests join together and form foraging flocks. Within about a month the immature birds learn to feed themselves, and the flock departs the breeding grounds soon afterward. Other than during the nesting season Bobolinks live in social flocks.

Although Bobolinks are numerous and adaptable, their U.S. population has declined significantly since 1966, according to the North American Breeding Bird Survey. 72 percent of Bobolinks breed in the U.S. and 28 percent in Canada. Bobolinks are on the 2014 State of the Birds Watch List, which lists species of birds most in danger of extinction without significant conservation action.

People have shot Bobolinks as agricultural pests in the southern United States, trapped and sold them as pets in Argentina, and collected them as food in Jamaica. But the main reason for the Bobolink’s decline is land-use change, especially the loss of meadows and hay fields. To improve the Bobolink’s prospects, people can maintain its breeding habitat by mowing fields annually once nestlings have fledged, and managing natural prairies through prescribed burning.

· Bobolinks are one of the world’s most impressive songbird migrants traveling 12,500 miles annually to and from southern South America every year, one of the longest migrations of any songbird in the New World. They use the earth’s magnetic fields and stars to navigate. During it’s lifetime Bobolinks will travel the equivalent of 4 or 5 times around the earth. Not bad for a bird weighing as little as one ounce.

· The species name of the Bobolink means “rice eating” and refers to this bird’s appetite for rice and other grains, especially during migration and in winter.

· A migrating Bobolink can orient itself with the earth’s magnetic field, thanks to iron oxide in bristles of its nasal cavity and in tissues around the olfactory bulb and nerve. Bobolinks also use the starry night sky to guide their travels.

· Bobolink molt twice a year, completely changing all their feathers on both the breeding and wintering grounds. When the male grows new feathers on the wintering grounds they all have yellowish tips, so he still looks like a nonbreeding bird. Eventually the pale tips wear off to reveal his striking black-and-white breeding colors.

· Normally a daylight forager, the Bobolink sometimes feeds after dark on bright nights during migration, to build fat reserves for its long flight over the Gulf of Mexico.

· The Bobolink was immortalized by nineteenth-century American poet William Cullen Bryant, in a poem titled Robert of Lincoln. The poem recounts the events of “Bob-o-‘Link’s” nesting season, describing the male’s flashy coat and song, the female’s modest attire and subdued voice, and the six purple-flecked eggs that hatch into nestlings.

· A flock of Bobolinks is called “a chain”.

· The oldest Bobolink on record was a female known to be at least 9 years old.

· Bobolinks are shot as agricultural pests in the southern United States, sold as pets in Argentina, and as food in Jamaica where they are known as ‘butter birds’.