The Common Redpoll can stand more cold weather than any other songbird. This seems unusual for such a tiny bird that weighs a mere ½ ounce, a quarter-ounce less than a Chickadee. But they have adapted well to the cold since the majority of their entire life is spent in it.  They nest almost to the Arctic Circle, sometimes beyond the tree line, in scrub bushes on the tundra. They breed from Alaska to Newfoundland in sub-arctic areas and winter just to the south of this region. During the long Arctic nights Redpolls will sleep in “snow-tunnels” to conserve energy.  They will drop from a tree branch into deep snow, making a tunnel about a foot long to roost in.

Redpolls get their name from the red spot on the top of their head. They are a small finch with a conical beak for cracking seeds. Other identifying features include a black chin. Their bodies are streaked which is common among many finch species, and the wings have broad white wing bars. Female Redpolls are similar to the males but have heavier streaks, and only the crown is red. Males have the red crown along with a pale red vest on the chest and upper flanks. 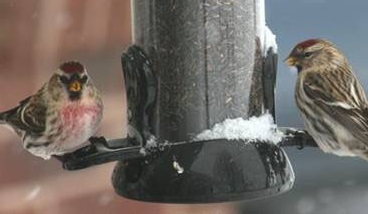 from the Rocky Mountains to the Atlantic Coast. Some years they may drift as far south as Southern Kansas. Their appearance in Central Canada and the upper United States is related to the availability of food sources in the wintry north. During such irruption years, redpolls often congregate at bird feeders where it is easy to get a close look at them. They seem to visit our area in large numbers about every two to three years, but heavy snows can drive them south at any time during the winter.

It is common to see Redpolls in the company of Goldfinches, House Finches and Pine Siskin and other members of the finch family. They will come to bird feeders for smaller seeds such as Proso millet, Nyjer thistle, and hulled sunflower seeds. Do not mistake them for the male House Finch which is much larger and their entire upper bodies are red.

If you see Redpolls at your feeders, the first thing you will notice is how tame they are. Since an encounter with humans in their arctic range is so rare they seem to tolerate us more than other birds do. Redpolls reside in regions so remote that their habitats are generally not subject to human disturbances and activity.

Common Redpolls feed on tiny seeds and buds from willow, birch, and alder trees. They are very acrobatic hanging upside down from thin branches collecting seeds from catkins. Redpolls also consume a variety of weed, wildflower, and grass seeds, especially during the winter months when they will readily feed on the ground. During the short summer months in the Arctic they will include spiders and insects in their diets.

When they feed during cold weather they ingest large quantities of seeds in a very short period of time temporarily storing the seeds in a throat pouch called a crop. They will then find a roost out of the wind where they will slowly digest the seeds. This method of feeding is how Redpolls conserve energy and stay warm for extended periods in harsh conditions. The seeds are digested with the help of grit, or small particles of sand and stone. The grit will aid in grinding and processing the food for digestion.

Common Redpolls form monogamous pairs that do not defend a territory. They will nest in a common area where nests can be close together. A nest site is selected by the female in a dense shrub, usually near a swamp or bog, and hidden from sight. In the open tundra she will select a place among driftwood or a rocky outcrop close to the ground.

The female will construct a loose open cup nest using twigs, grass, and moss. The nest is then lined with goose feathers, plant down, and hair or fur. Once she has completed the nest the female will lay 4 to 5 greenish-white eggs with purple blotches. The eggs will be incubated by the female for approximately 11 days before they hatch. The male will bring food to her during this period and continue to do so for the first few days while she broods her young. The chicks will remain in the nest for another 11 days before fledging, and are fully independent within a month from hatching.

We receive numerous reports during the winter months of folks seeing Redpolls at their feeders, so be alert for them. With plenty of winter ahead you never know when they may make an appearance in your backyard.

Wingtip: It is common for Redpolls to form winter flocks, whirling around as they move from food source to food source. These groups of Redpolls are collectively known as a “gallup” of redpolls.

Fun Facts about Redpolls from the Cornell Bird Lab’s All About Birds: