January is the time of the year when winter storms can rapidly develop and approach rapidly with heavy snows. To date many parts of the country have been spared by unseasonably warmer temperatures with little precipitation. But when the snows do arrive they rapidly cover many food sources for birds along with the grit needed by birds to digest the seeds. Grit acts as the teeth of birds. We normally take care of providing food and water for our backyard visitors, but often neglect the grit birds need to grind up their food. We can help them by throwing out sand or “chick” grit which most passerine birds need to digest their food. Grit can be offered separately or a small amount mixed in with the bird seed before filling the feeders. A coarse sand or fine gravel works well. Granite-Grit is available at the Wild Bird Habitat Stores for that purpose.

We do make a big difference in assuring the survival of our wintertime friends by the food and water we provide. If you are using a bird bath heater be sure to rinse out the old water and replace in with

fresh on a regular basis. This will help to reduce any chance of spreading bacteria. Many backyard bird enthusiasts who have provided open water over the years report more birds at their feeders as well. It is such a delight to have them entertain us through the coldest parts of winter. If you find your bird bath heater is not working, put the heater in the freezer for 30 minutes. Remove the heater and plug it in to a different electrical outlet than the one you were using. If the heater warms you’ll know it is either the electrical outlet you were using or the extension cord if one is used. Avoid long extension cords as power is reduced running through the cord resulting in the bird bath heater not working to its full capacity. If you have any questions contact a staff member at the Wild Bird Habitat Stores.

People who feed birds during winter’s cold and blustery weather are providing a wonderful service for these feathered creatures. It has been shown through research in Northern areas of our country that it may increase the survival chances of smaller songbirds by as much as 50%. This is quite a lot any way you figure it. I know in our case a lot of enjoyment would be lost.

Watch very carefully for any unusual birds, or those you can’t identify. This is the time of year we may see different birds arriving at our feeders or bird baths, drifting in from the north or western regions. Most of these wandering birds are seed eaters so we don’t have to change a thing. Other birds to watch for are Red Polls, Purple Finch, Crossbills, and possibly Evening Grosbeaks. We already have

good numbers of the northern Goldfinch, some Red-Breasted- nuthatch, but have yet to see or get reports of any Pine Siskin.. We have received several reports of Snow Buntings on the ground near bird feeders. On this past December 30 I was fortunate to see two Tufted-titmice at the bird feeders in the Pioneers Park Nature Center’s bird garden. Then we have all heard about the large influx of Snowy Owls appearing across the Midwest and Central Great Plains. They have been driven south in search of food as the Lemming population in their winter range has collapsed. Almost all these owls will be near starvation and most will not make it back to their northern territories, but will perish here. If you see a Snowy Owl you are asked to call the Nebraska Game and Parks Commission at 402-472-0641 or Raptor Recovery Nebraska at 402-994-2009 so they can ascertain the health of the bird. Snowy Owl photo by Steve Heironymus

While many folks are enjoying a good number and assortment of birds this winter others are not quite so fortunate. Some have reported low numbers of birds at their feeders to very few. There are many reasons that cause this. Weather, especially in the winter, has an enormous impact on bird movements along with food availability. The lack of snow cover has left food resources plentiful for birds to feed on. Warmer temperatures require birds to consume less feed for energy to keep warm. The lack of a hard winter in Canada has allowed many northern birds to remain in their territories due to food availability. Is the lack of birds at your feeders due to a hawk? Could be. Most often hawks remain in an area for a short time hunting, then move off to another hunting location at which time the birds will return. Occasionally a hawk might set up housekeeping in your yard. If this happens try taking your feeders down for a week until the hawk moves on. Whatever the reason, our mild winter is having a large influence on what birds are doing. But it can change in an instance as spring is still several months away.

Another bird that has been taking advantage of the milder winter we are having is eagles. By the end of January bald eagles are migrating back into their nesting territories. On January 1, New Year’s Day, Linda and I viewed 9 eagles, mature and immature, on the Platte River between Schramm Sate Park and Platte River State Park. They were standing on sand bars in the river no doubt feeding. With the lack of ice covered lakes and rivers many eagles may not have needed to move as far south as normal to find a food source. Whatever the reason we have received numerous reports of Bald Eagles in the area since late December and we certainly enjoyed the eagles we watched on the river. Eagle photo by Dave Titterington

In closing I just want to remind everyone to keep the suet out for the woodpeckers. By late January they will be pairing up and begin asserting themselves in their territories. Suet provides much needed extra energy for them. Keep the feeders filled. Many birds have identified that food source and if and when the weather changes to a more seasonal period the 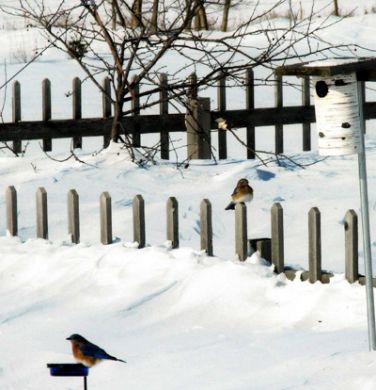 birds will be back at the feeders in great numbers. Keep your binoculars and field guide nearby and if you are taking a trip make sure to take them with you. Birding is a dynamic activity. It is always changing and one never knows what they might encounter. Start making plans to participate in the Great Backyard Bird Count. Take a walk around a lake or through the woods and you might be surprised at what you might see around the next corner.