With the exception of the Goldfinches, Cedar Waxwings and Mourning Doves which are common late nesting birds, the songbird nesting season is all but over. Goldfinches and Cedar Waxwings are late nesting waiting for a crop of natural foods to develop to feed their young. Goldfinch for example do not feed their young any insects but strictly seeds. This is the reason Cowbirds do not parasitize on Goldfinch as Cowbird young would not survive without being fed insects. Doves on the other hand nest all season long into late summer. Maybe it is due to the fact they only lay two eggs per brood. There may be some bluebirds that will raise one last brood during this final month of the nesting season and Cardinals and Robins that have lost a nest may also make one final attempt.

By late August the birds in our yards will be fully grown and in most cases on their own. Their juvenile plumage will begin to look more of an adult.. Most of the migratory birds that have spent the summer with us will become nervous and start flocking together in preparation for their eventual departure to a warmer climate. Many of these birds will molt into what is called their basic plumage which is much less colorful than their breeding plumage was. During the winter months this basic plumage will help these birds blend in to the environment and be less noticeable allowing them to have a better chance for survival against predators.

With the beginning of the molting season this month many birds may temporarily become less plentiful at the feeders. As birds molt their feathers flight becomes more difficult. Birds are leery to venture out into wide open spaces as they are more susceptible to predation during this period.. Bird feeders located in dense habitat may see less of a decline as the shelter helps to conceal them. Birds will also stop singing during the molt as they revert back to their natural instincts to be quiet. Feathers are lost and replaced in sequence so flight can still be maintained. After the molt is complete it will be much more difficult to tell this years young from the adult birds. Many of these young birds have already been driven away by their parents and are completely on their own. The molt into basic plumage may also make it more difficult to identify some birds, especially migrating warblers.

While some folks associate bird migration with cooler weather when they observe flocks of geese and waterfowl drifting south during the months of October and November, it is the subtle shortening of daylight hours that triggers the migration to start. The long trek south for the winter begins in August for many songbirds, shorebirds, and hummingbirds. The shortening of daylight hours, although unnoticeable to humans except for a shifting of shadows, is very apparent to migratory birds and triggers the need to move south if they are to survive. Our summer resident birds will become restless and start to feed in preparation for the trip. Hummingbirds will begin to arrive on their journey south by the middle of the month so it is best to have the hummingbird feeders ready with fresh nectar by August 15th. Our year round resident birds, Cardinals, Jays, etc. will start to congregate in loose feeding flocks as their nesting territories begin to break down. These birds will identify food sources, both natural and at bird feeders, which they will visit often during the coming winter months. Our winter birds do not rely on any one food source, but establish a number of feeding sites to assure their survival. Those who maintain bird feeders through late summer and early fall are certain to be on these bird’s feeding routes when the weather changes. There is a long standing misconception that birds will become dependent on backyard bird feeders but in reality, these supplemental foods only comprise about 25 to 30 percent of a birds diet.

This is the best time of year to attract Hummingbirds to your yard. It is much easier since flowers are in full bloom and insects are plentiful. That’s right…insects. The nectar in tubular flowers only provides carbohydrates to these little power houses for the energy required for such a high metabolism.. They get their p 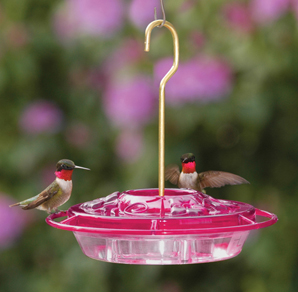 rotein from feeding on small invertebrate insects and tiny spiders. They can pluck a gnat out of mid air while in flight or collect aphids off the stems of a plant. This is the reason to avoid using pesticides as it eliminates their food supply.

It helps if you have a variety of flowers ready but it isn’t an absolute. Hummingbirds can be attracted to hanging baskets, which makes it possible for anyone to attract them, even on a second floor balcony. They are attracted to tubular flowers as those contain higher quantities of nectar, and that long beak and tongue evolved over millenniums to reach into tubular flowers to extract the nectar. You may see them around non-tubular flowers but chances are they are collecting insects.

The hummingbird migration through the Central Plains is increasing by mid-August. The earliest arrivals are July 30 and continues through October 8th. Wild Bird Habitat recommends having your hummingbird feeders ready no later than August 15th for best results, but putting up a hummingbird feeder anytime through mid-September can attract these little jewels. Many of these migrating hummers will be those hatched this year. Don’t be fooled by the young males as they will have the appearance of the female. These youngsters can become very aggressive towards other hummingbirds. They will try to bully their way into the nectar feeder driving off the competition. It is a good idea to provide several feeders during their migration preferably out of sight of each other such as opposite sides of your house since an aggressive hummingbird can’t patrol both feeders at the same time.

August is also when shorebirds begin their migration south. Start watching the mud flats around the rivers, lakes and ponds for migrating shorebirds. Whether you are a serious

birder or not, this can be an exciting experience to see thousands of these birds flying as if a choreographer had planned their every move. There will be many different species passing right under our noses, so don’t ignore the opportunity to get out and view them. In fact Nebraska has one of the most diverse variety of migrating shorebirds on the continent. Take along a good field guide and a pair of binoculars. Many of these birds are only seen during the migration period and several are birds of special interest in the Great Plains States.