If you live on the edge of an urbanized area next to natural open spaces or in the rural countryside, your attention may be drawn to the sound of a kitten mewing for its mother. It is a vocalization that has 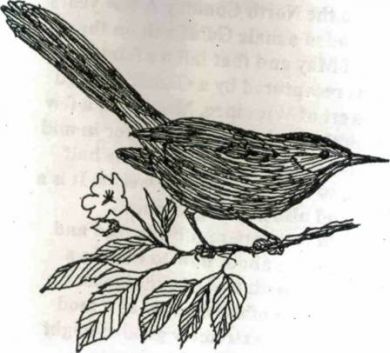 puzzled many folks, especially those who have gone out to further investigate the origin of the call and finding no kitten in peril.

The call they heard was that of the Gray Catbird, one that belongs to the same family of mimics as the Mockingbird and Brown Thrasher. We are often fooled by these bird’s imitations of other birds and animals. But between the three of them it is the Mockingbird that is the undisputed king of mimicry forever fooling birders in the areas where they reside. If you happen to live where all three of these mimics nest here is a tip that may help you tell them apart from their basic calls. The Mockingbird repeats phrases three or four times. The Brown Thrasher uses double phases. The Gray Catbird uses a single phrase.

The Gray Catbird has several basic calls from a quiet cat-like “mew” to a harsh “quit” or “chack” and can sometimes be heard at night. They will imitate the calls of many songbirds including jays, kingfishers, and grosbeaks.

The Gray Catbird is a robin size bird with a wingspan just under 12 inches and weighing about 2 ounces. They are a solid gray color with the exception of a black cap on the crown of their head and a bright rusty red patch under the tail. The bill, legs, and feet are also black. They breed from Southern Canada to Central New Mexico and across the Gulf states wintering in the Southeastern States and down through Mexico into the Central Americas.

Catbirds prefer dense vegetation that is low to the ground along with tangles, vines and briars located at the edges of forests, marshes, and streams. They do not venture into the interiors of forest or heavily wooded areas. Some suburban landscapes do provided the habitat needed to attract these birds. Catbirds primarily forage on the ground under bushes and low hanging branches for insects feeding on beetles, caterpillars, cicadas, crickets, grasshoppers, moths, ants, and aphids. They will also eat spiders, fruits, berries, and seeds including suet, sunflower hearts, and nuts at backyard bird feeders. Those who put out oranges to attract orioles may see Catbirds feeding on them as well.

The males arrive in the Midwest and Central Great Plains by late April setting up a territory of one to three acres. The females arrive about one week later and courtship begins. The size of the territory defended declines to a smaller area once nest construction starts, generally around the nest site itself. At first both sexes may construct several nests but the final nest is built solely by the female. The male may assist by bringing materials to her The Catbird nest is so similar to that of the Northern Mockingbird that unless the bird is on the nest it is difficult to tell the two nests apart. 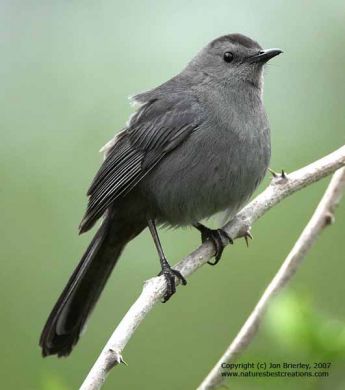 This well hidden nest is made of twigs, straw, bark and some mud then lined with finer materials such as grass. It is placed towards the center of a thicket or bush from two to ten feet above the ground. Once the nest has been completed the female will lay 2 to 5 bluish-green eggs incubating them for approximately 13 days. After the eggs hatch she will brood the nestlings with both parents providing food and guarding the young birds. Eleven days after hatching the youngsters will fledge to nearby branches where they will exercise their wings for several days as they become bolder in their first attempts at flight. The male will continue to feed them as the female goes off to construct another nest in the same area to raise a second brood.

The fledglings are fed by the parents for several weeks while they learn to locate food on their own. They will stay together as a family unit until the fall migration starts at which time they will join thousands of other Catbirds in pre-migratory flocks to begin their slow southerly trek to their winter range.

Interesting Facts of Gray Catbirds
• The Gray Catbird song may last as long as 10 minutes.
• Male Catbirds will sing loudly to announce their territory but will sing softly when around the nest. Their song becomes much quieter when they are near the nest, or when an intruder ventures into their territory. You may hear the female sing quietly back to the song of the male.
• The Gray Catbird belongs to the genus Dumetella, the Latin term for thorny thicket or “small thornbush-dweller” or “small bird of the thornbushes”. It refers to the species’ habit of singing when hidden in undergrowth. And that is where to look for Catbirds.
• The oldest recorded lifespan of a Gray Catbird was just under 18 years.
• A group of catbirds are collectively known as a “mewing” or a “seat” of catbirds.
Brown-headed Cowbirds are less likely to successfully parasitize Catbird nests since the Gray Catbird has the ability to identify their own eggs.
• The cat-like mewing is what gives the Catbird their name.
• Rather than scratching the ground with their feet as many ground feeding birds do when searching for food, the Catbird will use their beak to move leaf litter out of the way to locate insects.