The Hairy Woodpecker is a medium sized powerful woodpecker that is often times mistaken for a Downy Woodpecker at a quick glance. These two woodpeckers do share some of the basic pattern features. The males both have a distinct 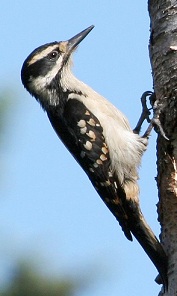 red patch on the back of the head which the females lack. They both have a black and white checkered pattern on their wings. And white down the center of the back. But at second glance you’ll notice the Hairy is larger, about one third larger in size than its cousin the Downy. The Hairy stands more erect with a straight back. They forage mostly on large tree trunks and main branches where Downy seems to prefer smaller limbs.

However the most noticeable difference in these two common backyard woodpeckers is the bill. The Hairy has a longer, heavier pointed bill. The Hairy’s bill is slightly longer than it’s skull from front to back while that of the Downy’s is only half the length of its skull. This is probably one of the easiest ways to tell the difference if you’re not sure which species it is. The Hairy Woodpecker is nearly two inches taller than a Downy with a wingspan up to 16 inches. They weigh in almost twice that of the Downy. Both are primary cavity nesters meaning they excavate a new home every year. The old woodpecker denizens are prize nesting sites for secondary cavity nesting birds such as Chickadees, Wrens, bluebirds and others. 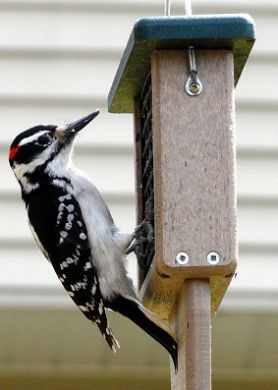 Hairy Woodpeckers are birds of heavily forested and wooded areas while Downy’s prefer open woodlands and riparian woodlands, treed areas along streams. Both species are common in urbanized areas, city parks and orchards with mature stands of trees. Their range in North America is very similar spanning most of the country up to Alaska with the exception that the Hairy Woodpecker’s range extends along a narrow strip into Central America.

Hairy’s, as with most woodpeckers, are primarily insect eaters and are known to consume many pest insects such as destructive tree boring beetles. When there is an outbreak of these damaging beetles in trees the population of woodpeckers increase in those areas. The Hairy, as with the Downy, are often seen at backyard suet feeders and those stocked with sunflower kernels or black oil sunflower seeds. Shelled peanuts are extremely popular with these two woodpeckers as it is with the Red-headed and Red-bellied Woodpeckers. If you haven’t tried feeding shelled peanuts I highly recommend it.

Hairy’s and other woodpeckers begin drumming in early February and will continue through most of the nesting season. This act serves three functions: Drumming, along with cackling type calls is used to announce their territories. Drumming is also heard when they are excavating a new nest site or when foraging for insects. Woodpeckers can be pretty noisy when announcing their territories. They will locate a “drumming post” that resonates over a large area. This may include old telephone poles, hollow branches, even a metal furnace flue atop a roof. Woodpeckers will locate several drumming sites within their territory.

The cavity of a Hairy Woodpecker requires an opening of 2 inches with a depth of nearly 12 inches. The bottom is enlarged to hold the eggs which rest on a pile of a few woodchips. It will take two weeks to excavate a nesting site located in a dead tree or on a dead main branch of a tree. By the end of February into early March some may have a clutch of 3 to 6 all white eggs already laid. Once the clutch is complete incubation will begin lasting approximately 12 days. However unlike most songbirds the time spent in the nest by the chicks after hatching is rather lengthy, up to 30 days.

Unfortunately the removal of dead trees has reduced nesting sites for all woodpeckers. This has impacted their population and is why many woodpecker species are in decline. The European Starling poses an additional threat to woodpeckers as well as many other cavity nesting birds. Starlings, a non- native European species introduced into North America in the 1800’s, is a cavity nesting bird that will aggressively compete for the declining number of suitable nesting sites. Starlings commonly will drive off native cavity nesting birds, or kill them, taking over the nest cavity for their own use.

Downy Woodpeckers, even with a smaller opening to their cavity which is not large enough to accommodate Starlings are not immune to this invasive specie’s persistent harassment. A pair of Downys having nested in a dead branch of a maple tree in our yard was constantly a target of a group of Starlings until one day we discovered the male dead on the ground under the nest opening.

A songbird in the wild has less than a 50% chance of surviving more than two years. However, if a young bird can survive accidents, disease, predation, migration, and winter starvation, it may live a surprisingly long time, 7 to 10 years and possibly longer. As a general rule, larger birds tend to live longer. It also helps to be at the top of the food chain. But birds are still no match for adverse human activity with loss of habitat being the number one cause of declining bird populations. Just within my lifetime the planet has lost nearly half the populations of bird species and some are on the brink of extinction. The survival rate of birds is based on data collected from banding birds. People have been banding (or ringing, as it is called in Europe) birds for centuries. The first record of a metal band attached to a bird’s leg was about 1595. The scientific banding of birds in North America began over 100 years ago.

Birds have been a source of wonder and amusement since the beginning of human habitation of the planet and to this day continue to attract our attention. Birds evoke our imaginations and curiosity about the world we share with them just as they did our ancestors. It always excites us to identify a new bird in our backyard so the next time you take a quick glance at a woodpecker at your feeders take a second look. It just might be the Hairy Woodpecker. 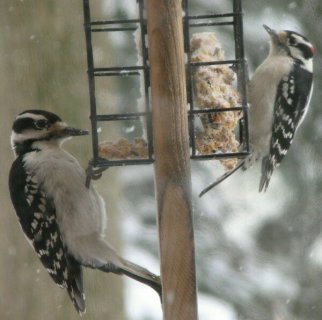