The Strong Winds of Spring 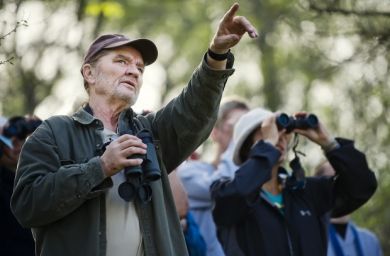 Strong winds the last few days of April were more than noticeable to everyone. But when those winds began to blow from the south I knew that any day we’d begin seeing our neo-tropical visitors along with other summer birds arriving. Some of these birds will remain to nest while for others it would be a short break before traveling further north, many to the Boreal Forests of Canada.

The timing of the arrival for these migrants could not have been better. It coincided with the second bird walk of the 2011 OLLI Birding #405 Class. Now in its second year, this OLLI Class on “all things birding” is facilitated by Dan Wheeler, Professor Emeritus and Former Head of Ag Leadership, Education and Communication, University of Nebraska-Lincoln and myself. Dan became an avid bird watcher growing up in West Virginia.

This birding class covers a broad number of bird topics meeting once a week for six weeks. Included are two bird walks at the Pioneers Park Nature Center where the 34 participants put to practice some of the bird watching techniques covered in the classroom. Besides discussing the tools of bird watching such as binoculars, field guides, and media software devices, sessions include bird feeding, landscaping for wildlife, where and when to go bird watching, becoming a citizen scientist, and making bird watching a lifelong activity.

It was Tuesday, May 3rd after the southerly winds had died down that the class met at the Nature Center for our second bird walk, and no one was disappointed. Yellow-rumped Warblers were bountiful everywhere one looked with a scattering of Black and White and Palm Warblers amongst them. The list of birds identified continued to grow. Wilson’s Phalaropes milled around the Northern Shovelers on the ponds along side Blue and Green-winged Teal, Yellow Legs, Dowitchers and other water birds.

I knew we would be seeing a large number of birds, but had not anticipated seeing such a diversity of species. The group identified 58 species of birds, the largest number yet I have enjoyed on a single 1 1/2 hour bird walk at the Pioneers Park Nature Center. The Wild Bird Habitat Stores have pledge to donate $5.00 for each species to the 2011 Wachiska Audubon Birdathon in the name of the OLLI Birding Class.

Take a bird walk this spring. And if possible, take a kid along with you. The Pioneer Park Nature Center is open 8:30 to 5:00pm daily, Sunday Noon to 5:pm. There are plenty of trails that are easy to navigate and there is no charge to enter. For more locations to go bird watching visit the following websites: