The Sandhill Crane has one of the longest fossil histories of any existing bird, with the oldest dating back 2.5 million years. This is almost twice as old as the remains of most current living bird species. But even more amazing are the fossilized remains found in Nebraska of what is believed to be the early prehistoric ancestors of the Sandhill Cranes which date back over 10 million years. With the Platte River dating back a young 10,000 years, these early cranes were sharing a savannah type habitat with the North American rhinoceros, camel, and elephant that have long been extinct.

The Sandhill Cranes survived and adapted as the prairies developed some 14,000 years ago. They witnessed the prehistoric mammals replaced by the American Bison, Pronghorn Antelope, and elk. And in just the last 150 years have further adapted to the influences of man along with the introduction of cattle, row crops, and sprawling urban communities.

The common name, Sandhills Crane, is derived from its relationship with the Platte River surrounded by the Nebraska sandhills. This region is an important annual migratory stopover for more than 500,000 Sandhill Cranes. 15% of that population are intermediate, or Sandhill Cranes which nest in Canada, 5 % are Greater Sandhill Cranes, and the balance are Lesser Sandhill Cranes. The Sandhill Cranes that pass through the heart of Nebraska known as the Central Flyway, winter in Texas, New Mexico and Mexico. The normal arrival date in Nebraska on their way north is late
February. The crane population along the Platte River peaks by late March, and by the second week of April, other than a few stragglers, they have made a mass exodus to the breeding grounds. As the Greater Sandhill Cranes settle down to nest in western Minnesota and Manitoba, the Canadian, or intermediate cranes head for central Canada from the Rockies to Hudson Bay. It is the Lesser Sandhill Crane that migrate into the high Arctic nesting across Northern Canada and Alaska with close to 100,000 of them crossing the Bering Strait to nest in Eastern Siberia. 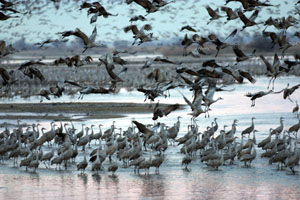 When the cranes reach the Platte River on their way north they will spend approximately 29 days increasing their body fat by a quarter of their weight. That will provide the energy needed to complete the migration and begin nesting. Cranes are omnivores. 90% of their diet during their stay in the Platte Valley is corn with about 10% consisting of invertebrate insects, worms and crustaceans. Prior to the consumption of vast quantities of waste corn they feed on today during their stay, before agriculture shaped the plains the cranes fattened up on a variety of starchy wetland tubers. Today only 10% of those natural wetlands exists having been replaced by corn and soybeans.

After a day of feeding in the fields surrounding the Platte River, the cranes begin to move toward the river as the sun lowers on the horizon. By dusk tens of thousands of Sandhill Crane began landing in the shallows of the river to roost for the night. This provides a respectful degree of protection from predators. As many as 12 to 15 thousand cranes can congregate along a single half mile stretch of the river to spend the evening.

When the cranes head for the river to roost, they arrive in lose flocks scattered across the sky. As they land on the water it appears as if a large feathered raft is being created. But in the morning as the sun rises a nervous anticipation spreads through these massive groups of cranes scattered up and down the river. Then, all of a sudden as if on cue, thousands of cranes ascend into the air with a unified shattering sound of calls and wing beats. It is repeated up and down the river until the sky is becomes a shadowy mass of cranes spreading out to select a field where they will spend most the next 8 to 10 hours feeding, loafing, and interacting between family members and with their neighbors.

While in the fields feeding, they can be seen performing their well known “dance of the cranes.” Mated pairs will bow to each other with outstretched wings, leaping high off the ground. They may grab sticks or corn stubble and repeatedly toss it into the air during these displays. This courtship is believed to strengthen the pair bond between mates. Sandhill Cranes are monogamous, remaining together for life which can be well over 25 years. But Sandhill Cranes are confronted by many obstacles. Apart from being hunted in some states, they encounter predators, harsh weather, and loss of habitat which has had the most impact on the reduction of all bird species across the planet. If a cranes loses their mate, they will dance to select another. And for those Sandhill Cranes just reaching sexual maturity after 3 to 5 years, the gathering of such a large number of potential partners throughout the fields bordering this 65 mile stretch along the Platte River each spring provides an opportunity to find a companion. Although among all this dancing and posturing, the jumping, bowing, arching of necks and stick throwing, it is primarily a part of courtship, pair bonding, and a mating ritual. Using a variety of postures is a way to communicate for these hundreds of small family groups that makeup these massive flocks of birds. Scientists speculate it fosters socialization within the group and relieve tensions.

The vocalization of by Sandhill Cranes is also distinctive. Both the males and females make a rattling “kar-r-r-r- o-o-o” sound. It is a sound that, for many Nebraskans, has become as much a harbinger of spring as the sight of an American Robin. The call can vary in length, strength and become louder depending on its intention. The loudest and most noticeable call is during the mating season. Males and females will sing loudly to each other. It is called “unison calling.” The cranes stand close together, calling in a synchronized and complex duet. The female makes two calls for every single call of the male.

During their stay on the Platte River Sandhill Cranes can be seen soaring on thermals strengthening the flight muscles that will carry them further north in the days to come. They will use these same thermals when they depart the river riding them several thousand feet into the sky then soaring northward to the next thermal where they will regain lost elevation. This method is very efficient and will be repeated over and over until they reach the nesting territory. On a good day Sandhill Cranes may cover as much as 500 miles, although an average day is generally 150 to 300 miles. Their speed averages between 25 and 35 miles per hour, but increases significantly with a good spring tail wind.

Once they have reached their nesting grounds little time is wasted. A nest will be built constructed from nearby vegetation scratched into a small mound where the female will lay two eggs. These nests are located for the most part in bogs and wetlands, some nearly floating. Both of the eggs may hatch but only one chick will survive the ten weeks it takes to be capable of the long migration south. This can be due to predation, food supply, but most often it is siblings rivalry. The pair will take care of the nest together. While the female incubates the eggs for approximately 30 days, the male will aggressively stand guard, warding off any predators. Once hatched The young are capable of walking and swimming within 24 hours, and can feed themselves almost immediately, become independent in about two months. Pairs remain together year round, and migrate south with their young of the year, which fledge at about 70 days.

Sandhill Cranes are very large birds with long thin legs and necks. They stand 3 to 4 feet in height, and have a wingspan of 6 feet when full grown. Their weight varies between 8 to 12 pounds. They are pretty hard to miss seeing. The feathers are mostly grayish but the shade of gray can vary widely. The forehead has a bright red patch that is one of the most distinguishing features of the bird along with white cheeks. The red patch on the forehead is actually bare skin. Sometimes they may appear to have a reddish-brown appearance. This is because Sandhill Cranes preen themselves by rubbing mud on their feathers. Maybe it helps control feather mites or other parasites that thrive among large groups of birds. Maybe it is unintentionally gathered in their bill while foraging for food. None-the-less, the color may vary depending if the mud is brown or red.

Their bills and feet of a Sandhill Crane are important tools. A crane’s bill is very sharp and sturdy being useful when probing frozen soil. The edges are serrated to grasp slippery food like worms, tadpoles, or snakes. Not only is the bill used for preening, it can also double as a weapon. The feet and legs of a crane work in conjunction with the beak whether foraging for food or defending itself. The foot has three long toes with claws on the end. These claws are very sharp and can be used for scratching in dirt to find food as well as protection. When a crane is threatened, it will use its wings to maintain its balance and then jump up and strike at the attacker with its feet.

Its hard to believe in this age of media someone has not seen documentaries and images or heard about the Wildebeest migration across the grassy plains of Africa. Yet right here in the central part of North America, along a 65 mile stretch of the Platte River in the middle of the Great Pains called Nebraska, is a migration of wildlife that rivals any on the planet. The migration of the Sandhill Cranes.