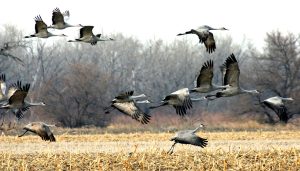 If the calls of the Sandhill Cranes, or the sound of flocks of Snow Geese overhead, send a tingle down your back and gives you goosebumps – then you have the onset of spring bird migration fever. Once you’ve witnessed the Sandhill Crane migration and heard those calls it will lure you back again and again every spring. Dave of Wild Bird Habitat Stores

Every year, birding enthusiasts from across the country and from around the world journey to the Central Platte Valley in Nebraska to watch the largest wildlife migration in North America, second only on earth to that of the wildebeest on the African Plains. It’s that of the Sandhill Cranes.  From late February through March more than 600,000 of these birds make a stunning appearance on the central Platte River in Nebraska. They will rest and feed adding a quarter of their weight to provide the energy they need to continue the long trek to their summer nesting range far to the north.

Of the three crane species that converge on this 70-mile stretch of the Platte River annually, the greater and Intermediate Sandhill Cranes will spread out across Canada to nest. The majority of the lesser Sandhill Cranes will travel toward Alaska and as far as Siberia to raise a family.

The Sandhill Cranes we see today have one of the longest fossil histories of any existing bird, with the oldest dating back 2.5 million years. This is almost twice as old as the remains of most current living bird species. But even more amazing are the fossilized remains found in Nebraska of what is believed to be the early prehistoric ancestors of the Sandhill Cranes which date back over 10 million years. With the Platte River dating back a young 10,000 years, these early cranes were sharing a savannah type habitat with the North American rhinoceros, camel, and elephant that have long been extinct. The migration remains virtually unchanged since the birds came into existence during the Eocene period, which is why many people refer to Sandhill Cranes as dinosaurs. 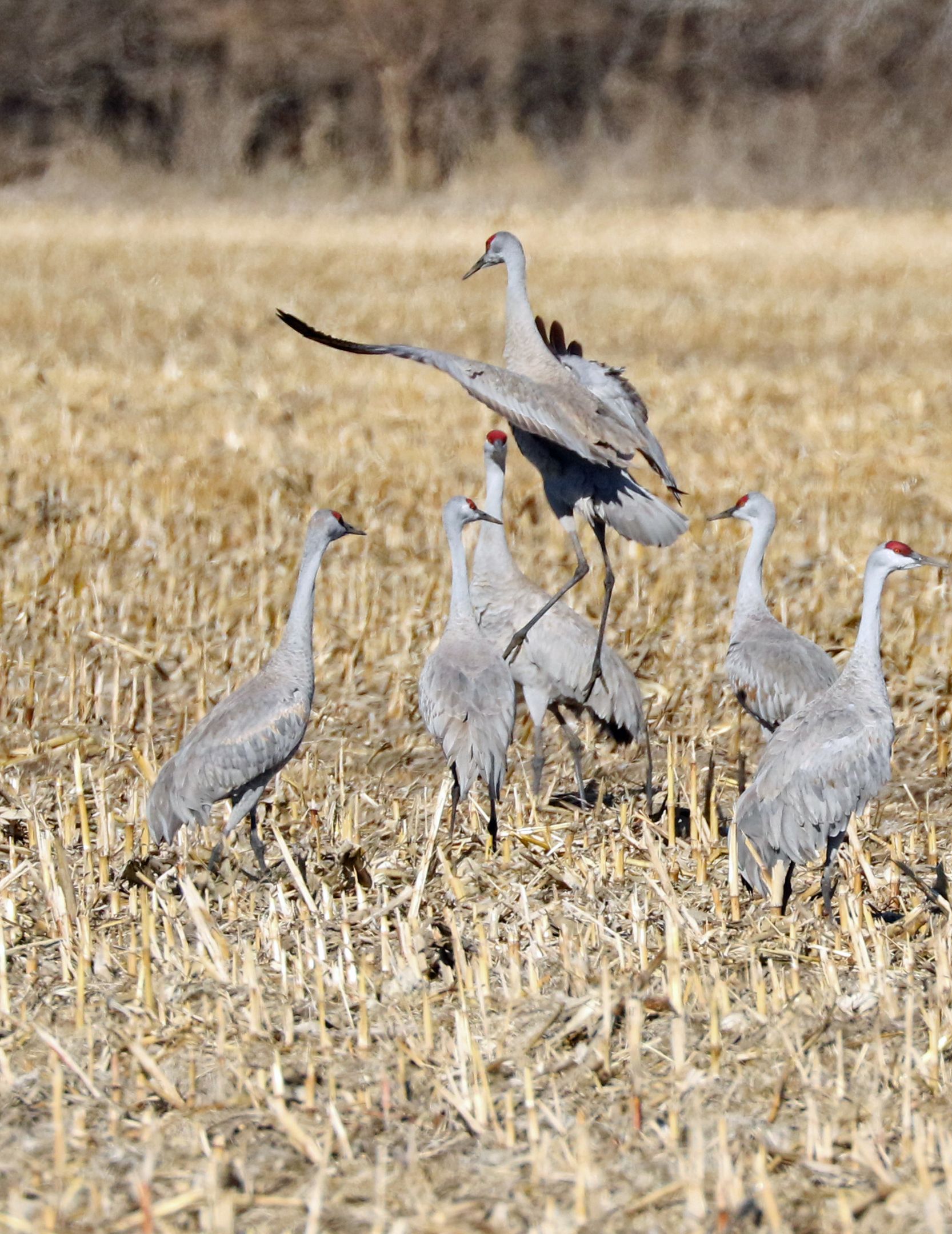 Wingtip: Sandhill Cranes were named in reference to the 20,000 square miles of sandhills in central Nebraska. The sandhills region is the largest dessert in the northern hemisphere with the rolling sand dunes being anchored with vast seas of prairie grasses.

The current Sandhill Cranes we observe survived and adapted as the prairies developed some 14,000 years ago. They witnessed the prehistoric mammals replaced by the American Bison, Pronghorn Antelope, and elk. And in just the last 150 years have further adapted to the influences of man along with the introduction of cattle, row crops, and sprawling urban communities.

WHERE AND HOW TO VIEW SANDHILL CRANES

Viewing the Sandhill Crane migration is a simple day trip from many areas of Nebraska to the Kearney / Grand Island region. During the day you can traverse the county roads observing thousands of Sandhill Cranes feeding, loafing, and dancing in the fields and meadows. Blinds on the Platter River are available to watch the cranes return to the river nightly to roost, or in the morning as tens of thousands leave the river with a deafening sound to gather and feast during the day.

If you are traveling into Nebraska for this world renowned migration there are plenty of accommodations in Kearney and Grand Island Nebraska where there is plenty to see and do. 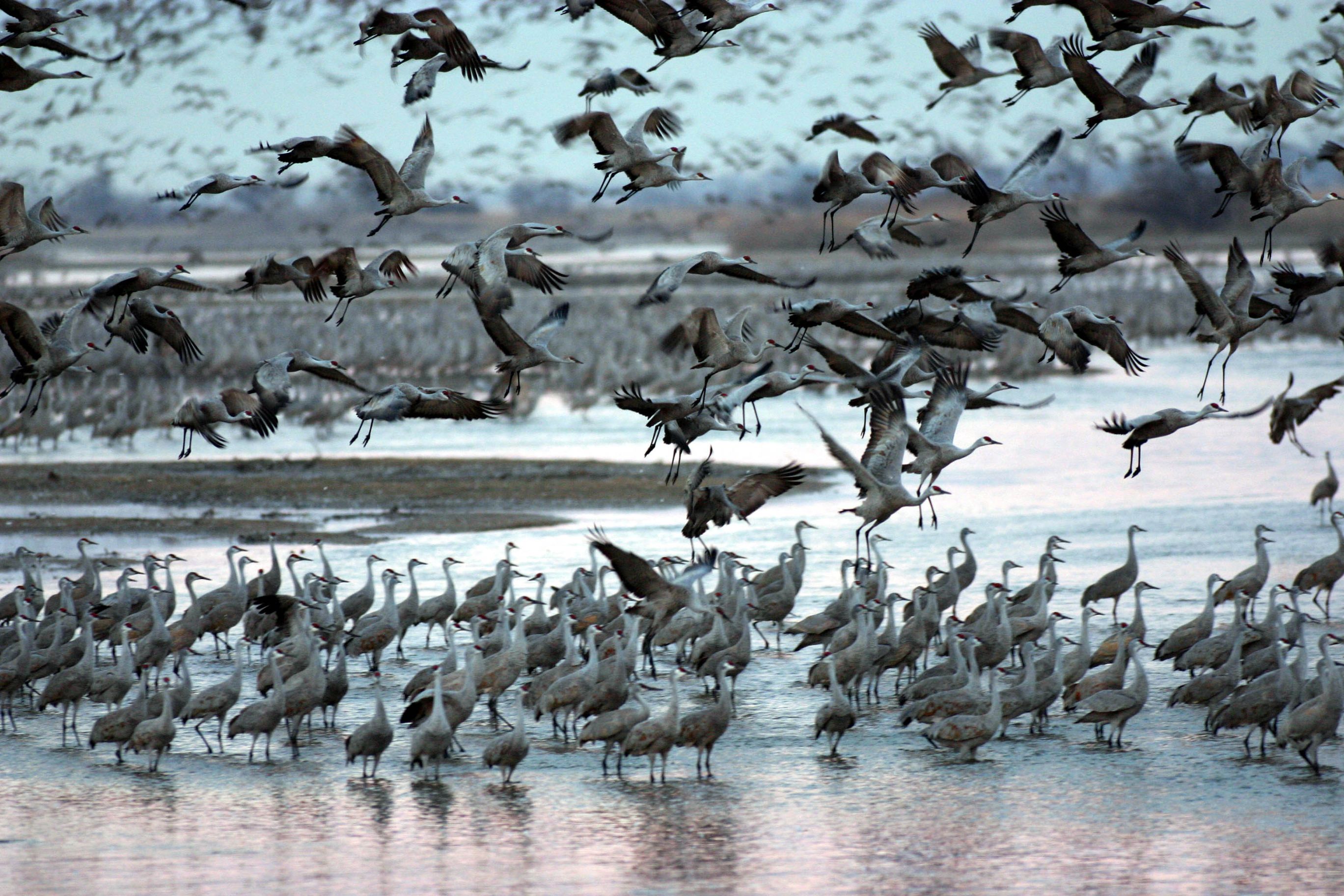 For more information on the Sandhill Crane migration, and accommodations for overnight travelers, visit the NEBRASKA FLYWAY. We also recommend ROWE SANCTUARY and Nebraska’s CRANE TRUST for additional information.

Watch these magnificent birds congregate in enormous flocks to roost on the Platte River at sunset, or depart the river in a mass exodus to feed in the fields at sunrise through March: CRANE CAM 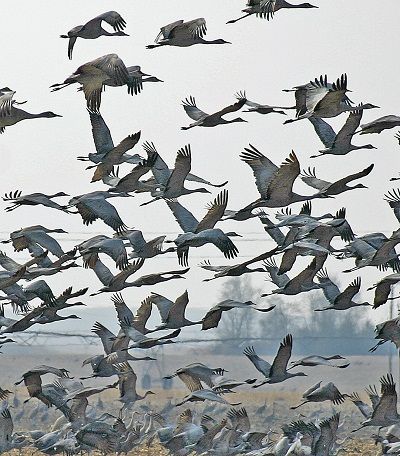 Diet:  Cranes are omnivorous and their diet varies depending on the season and where they are at.  The cranes that visit the Platte River valley feed primarily on waste grain left in corn fields, making up 90% of their diet while here.  The other 10% comes from plant and animal foods found in wet meadows adjacent to the river.  Seeds, fleshy tubers of plants, grubs, earth worms, snails, amphibians, small reptiles and small rodents are all fair game.

Color:  Adult is gray with a red crown (bald patch of skin); juvenile is browner overall and has a feathered crown.

Status:  Stable to increasing, except for the isolated populations in Mississippi and Cuba. The total for all subspecies number between 600,000 – 800,000, with the lesser Sandhill Cranes being the most abundant, approximately 500,000.

Sandhill Cranes have been found as far north as Alaska and Eastern Siberia. In order to reach these destinations, cranes must build up enough energy to complete their long journey and to begin breeding. For the cranes, the Platte River Valley is the most important stopover on this migration. The river provides the perfect spot to rest, and the nearby farmlands and wet meadows offer an abundance of food. Without the energy gained along the Platte, cranes might arrive at their breeding grounds in a weakened condition — where food may be limited until the spring growing season begins.

The Platte River region has a variety of habitats that support cranes. The most important is the Platte River itself. The river is very shallow and sandbars dot the channels. It is here the cranes rest at night, gaining protection from predators like coyotes.

In the morning, cranes shuffle up and down the river waiting for the sun to pop up over the horizon. As the sun rises, cranes head out to feed and loaf in the surrounding fields.  During the day, cranes “dance” to relieve the stress of migration and strengthen pair bonds.  Cranes are very “social” birds and in the evening, congregate in wet meadows before heading back to the river for the night. 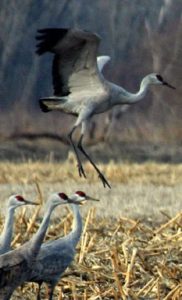 Cranes are opportunistic fliers, relying on thermals and tail winds to carry them along.  Thermals are rising columns of warm air and when southerly winds start to blow in late March and early April along the Platte, you will see cranes testing them for flight conditions.   Cranes ride thermals so efficiently that they have been seen flying over Mt. Everest’s peaks 28,000 high.

Their bills and feet are important tools. A crane’s bill is very sharp and sturdy, useful when probing frozen soil. The edges are serrated to grasp slippery food like worms and snakes. Not only is it used for preening, it is also used as a weapon.

The feet and legs work in conjunction with the beak. The foot has three long toes with claws on the end. These claws are very sharp and can be used for scratching in dirt to find food and for protection. When a crane is threatened, it will use its wings to maintain its balance and then jump up and strike at the attacker with its feet.

How do they do that?

Do you ever wonder how cranes stay warm while standing for hours in near-freezing water?  They can reduce the amount of blood that has to be warmed by constricting blood vessels in their feet. Also, the arteries and vessels in their legs are right next to each other so the colder blood is warmed before it reaches the body.