One thing is inevitable. Winter is on the way and it is going to snow. So I thought it appropriate to feature the Snow Bunting as December’s 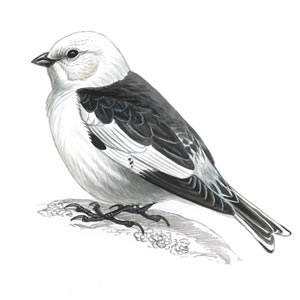 bird of the month. It is a bird that endures wintry climates more than any other bird of its size. Snow Buntings are Arctic specialists, breeding across the Northern Hemisphere in the Arctic. In fact the only other bird species to nest that far north is the Common Raven. Just as Juncos are known as “snowbirds” since its arrival precedes the first snow falls, the Snow Bunting is sometimes called a “snowflake” as flocks of buntings in flight remind some of a snowstorm.

The Snow Bunting is a bit larger than a sparrow, 6 inches, with a wingspan of 11.5 inches, rather large compared to other buntings. They weigh between 1 to 1.5 ounces. This bird can be easily identified by the large white wing patches. The male in breeding plumage is all white with a black back, wingtips, and tail feathers. The male also has a black bill. The female is all white with more of a brownish black on the back, wings and tail. Her bill is a yellowish orange. brownish-buff color. As with Goldfinches, buntings molt only once a year. In the fall, they molt into the non-breeding plumage. By spring, the outer tips of the feathers have worn off to reveal the breeding plumage underneath.

If you were to see a flock of these birds they appear to be rolling as those in the back of the flock continually fly over the top of the others moving to the front. This fluid motion continues as they fly over a field. Snow Buntings are ground foraging birds feeding primarily on seeds, especially in the winter. During the summer months insects and spiders will become part of their diet and will be a staple food for the young in the nest.

Breeding habitats in the barren tundra of the Arctic are rock piles and boulder fields or rock outcrops. The males arrive in this high Arctic breeding ground as much as four to six weeks ahead of the females, usually the beginning of April when the temperatures can reach 30 below zero. The male selects a nesting site and begins defending the territory around it. They will flock together with other buntings to forage for food and often roost in large groups. When the female arrives she will construct a thick nest made of grass, lichen, and moss finishing the interior of the cupped nest with fine grasses, feathers, and hair. Nests are located in rock crevices and cavities protected from the wind.

Once she completes the nest a clutch of 3 to 9 cream colored eggs with irregular brown spots and squiggles will be laid. The eggs are incubated by the female for 10 to 16 days with the male feeding her on the nest. Both parents will feed the newly hatched youngsters for another 10 to 16 days before they leave the nest. Within a few days these young birds are catching their own insects, but the parents will continue to feed and tend to them for about two weeks. This will be the only brood the Snow Buntings will raise during the short Artic summer.

At the end of the breeding season the Snow Bunting will begin to drift south wintering from Northern Canada south to the Dakotas and extending into Nebraska and Colorado. They will span this area from Alaska to the Atlantic coast. Winter habitats include open lands, prairies, farmland, and roadsides. Snow Buntings have been seen in open backyards feeding on the ground under bird feeders.

So as you prepare for the upcoming winter consider the Snow Bunting who lives in a deep freeze almost all year long. And keep a lookout for these fascinating birds during the winter months. You just might see this migrant from the far north.