Skip to content
Published by the Wild Bird Habitat Stores

Swoosh! Out of the corner of my eye a blur of feathers catapults across my backyard powered by stiff, rapid wing beats. Blue Jays immediately sound the alarm. Their calls alert all the birds that haven’t yet taken flight or headed for cover as they bolt for safety. A strike and a miss. Another strike and a miss. The ambush is over. The perpetrator soars up onto a branch where he scours the surrounding area for any bird that may not have escaped. 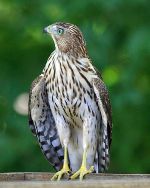 He doesn’t notice the Mourning Dove on the ground frozen in time for the moment. Too afraid to even blink an eye. Or the female Northern Cardinal on the platform bird feeder who seemed to have turned to stone. An occasional gust of wind ruffles their feathers some, but they refuse to make any movement that may draw the attention of the predatory eyes overhead.

I notice a downy woodpecker has also been caught by surprise and clings tight to the scaly bark on the trunk of a hackberry tree where moments ago it was foraging for food. This little Downy Woodpecker is hoping he hadn’t had his last supper. The first instinctive choice of all prey is to flee when a predator emerges. But for these three birds today that choice is out of the question. Now their only hope is to freeze. Don’t make a move.

The dove, cardinal, and the woodpecker are the only remaining birds. Just minutes earlier the area was a flurry of avian activity. Cardinals, Chickadees, Dark-eyed Juncos and others were busily consuming seeds at my bird feeders after a cold wintry night. Now all have abandoned the site except for these three birds who appeared more like statuettes than actual birds, wishing this hawk would move on

As I looked up into the tree where this hawk had confidently perched, I notice the thin pencil size legs and square tail with a hint of a white bar at its tip. His back and tail were a grayish color extending up the back of the neck unbroken on to the crown of the head giving this bird the appearance of wearing a hoodie. I knew these to be the field marks of a Sharp-shinned Hawk who had probably traveled here from its summer range in the Boreal Forests of Canada. The red eyes told me this was an adult bird and had probably raided my yard before, maybe the previous morning or even the previous year.

The Sharp-shinned Hawk and Cooper’s Hawk are woodland predators. They have short, rounded wings and a long agile tail, just what’s needed to maneuver at high speeds through heavily wooded areas to catch prey which 90% of time is other birds

Those shorter rounded wings allow these hawks to chase a bird at high speed into shrubs, evergreens, and thickets to catch them. This is why when these hawks appear in your yard typically all birds completely vacate the area.

One of the most useful hunting techniques of either of these two hawks is the element of surprise.  They will lurk out of sight, staying concealed behind objects like dense shrubbery, a fence, garden shed, or house.  When birds become comfortable with their surroundings feeding, bathing, or just loafing on a branch, is when these woodland hawks launch their attack. With a dozen or more birds flushing they attempt to focus in on a single bird. It can get frantic for the hawk trying to determine his best opportunity for a kill in the flash of an eye. 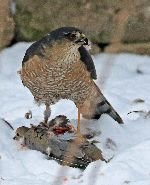 Once the attack has ended, if the hawk was successful, they will commence feeding. If a hawk did have success catching a bird in your yard, all you’ll discover left is a pile of feathers.  If not, they will perch in the area waiting to see of an unsuspecting bird shows up. If not, they will tire of the wait and move on to another predetermined location

Both the Cooper’s and the Sharp-shinned will typically stake out sites from backyard bird feeders to city parks or natural areas where there is an abundance of bird activity. They will visit these sites in an orderly routine daily in hopes to catch a meal.  They often follow a schedule so check the time when they appear in your yard. They will generally arrive at the same time daily give or take thirty minutes.

I continued to watch the Sharp-shin Hawk in my yard as now do the Blue Jays and a lone crow that showed up to see what all the excitement was about. A dozen jays call out in random unison broken only by the occasional “caws” of the crow. The sharpie continues to ignore the jays demands to leave, so they begin to creep even closer, dive-bombing this intruder at a safe distance so as not to become his next meal.

Eventually, after taking the opportunity while on its perch to do a bit of preening, this predator realizes every nearby bird has become aware of his presence. Even the Black-capped Chickadees have become intolerant of his presence and are badgering him. It’s time to move on. This hawk decides to move on from my backyard to another feeding location. However, he leaves with the “party” of Blue Jays and lone crow in tow. But as he leaves my backyard to his next location where an unsuspecting bird may fall prey to his talons, he realizes that the “party” of Blue Jays and lone crow are following and will only announce his arrival at the next site, so he must shake them.

The Sharp-shinned Hawk is the smallest hawk in North America and a daring, acrobatic flier.  These raptors have distinctive proportions: long legs, short wings, and very long tails, which they use for navigating through heavily wooded forests at top speed in pursuit of songbirds or an occasional mouse. When they, or the Cooper’s Hawk, hunt my yard I look at it as a naturally occurring predator/prey relationship that happens daily across the animal kingdom whether its insects, foxes, snakes, or coyotes. 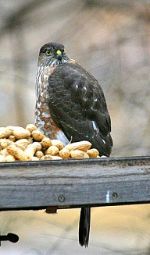 To make a positive identification between these two hawks that are common backyard visitors you must look at the more identifying features know as field marks. One of the most distinguishing features is the tail. The end of a Sharp-shinned hawk’s tail is square and has a thin white tip. The outer feathers are slightly longer. The Cooper’s hawk on the other hand has a more rounded tail with a larger white tip. The Cooper’s hawk is considerably larger, 14″ to 18″ with a wingspan of up to 35″, the Sharp-shinned Hawk smaller averaging 9″ to 13″ with a wingspan that can approach 22″.

As with most raptors the females are the larger of the two genders. In fact, a large female Sharp-shinned hawk can appear to be the same size as a male Cooper’s hawk.

Wingtips: Unlike owls that hunt in low light conditions using superior stealth adaptations allowing them to catch their prey most of the time, hawks face a different challenge. Hawks are diurnal, hunting during the day when not only can they see their prey, but their prey can see them. That makes catching a meal more of a challenge. Hawks are far less successful than owls when it comes to catching a meal and may go more than a day without eating.

The Most Successful Predator in Your Yard 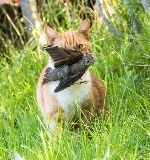 Throughout the year we receive calls by folks appalled or disgusted at the hawks for hunting birds at their backyard bird feeders. Calls are more frequent in winter when Sharp-shin Hawks move south from northern regions fanning out across the lower 48 states preying on other birds. I find it quite ironic that many people show less concern for the 2.5 billion songbirds killed annually by free roaming cats but are taken aback if a Coopers or Sharp-shinned Hawk is trying to make a living in their neighborhood. Birds of prey, as with most wild predators, will only take what they need to provide subsistence to stay alive. A much different practice than that of the common house cat, the most successful predator on the planet, which kills even if they are well-fed.