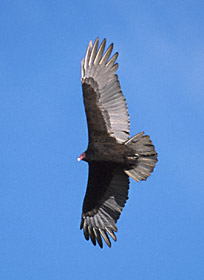 One of the most graceful birds ever to take to the air often soaring for six hours or longer without the slightest wing beat, yet is cumbersome on the ground and rarely considered attractive, is the Turkey Vulture. With spread wings they will gain lift from thermals, hot air drafts rising from the earth. When this thermal dissipates they will soar downwards reaching speeds of 60 mph until catching the rising air of another thermal draft. These thermals will continue to elevate the vultures high into the sky where wind currents will take over allowing them to soar effortlessly for hours.

Turkey Vultures, common in Nebraska and seen daily in South Lincoln, are one of seven New World vulture related to the California Condor and Black Vulture found in North America, and the Andean Condor, King Vulture, and the Greater and Lesser Yellow-headed Vultures found in South America. Condors are the largest flying birds with less than seventy California Condors in existence and on the verge of extinction. There are 15 species of Old World Vultures that occur in the warmer regions of Europe and across most of Africa.

Vultures are large, carrion-eating birds. As an adaptation for this messy diet, the head and neck of both new and old world vultures are mostly bare except for a thin covering of down. But that is the only common denominator between these two groups that are worlds apart. Besides DNA evidence there are several recognizable characteristics that make them different. Old World Vultures have strong clutching talons as their raptorial ancestors along with sharp powerful hawk like beaks. New World vultures have weak, chicken like feet, which are suitable for running on the ground.

These vultures cannot lift or carry food with their feet.  They can only step on their food to hold it in place while eating. They also have weaker, thinner beaks. In fact New World Vultures are closely related to storks and ibisis.

The Turkey Vulture is often referred to as a “buzzard”. The name was probably derived by early English colonists in America. The European Buzzard is a raptor and closely related to the American Red-tailed Hawk. Since there are no vultures in England, all large soaring birds were given the common name buzzard by these New World colonists.

Male and female Turkey Vultures are mono-morphic meaning they appear identical. Their heads, like its namesake the turkey, is bald and red. Immature vultures have grey down on their heads as it takes two years before reaching adult maturity. Its plumage is primarily dark brown to black. In flight the undersides of the flight feathers appear silver or white. They 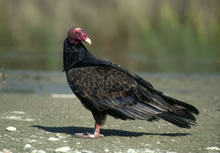 range from 25 to 32 inches in length with a wingspan of up to six feet. Healthy adults will weigh as much as six pounds. They are fairly easy to identify on the wing by the dihedral or V-shape they hold their wings in unlike eagles and other raptors which hold their wings straight out.

The bald head of a vulture is a necessary adaptation with a purpose. While eating carrion it often must reach inside an animal carcass to feed. You can imagine what would become stuck on a head full of feathers including a host of bacteria. But after eating the Turkey Vulture will perch in the heat of the sun where what little has managed to cling to the few bits of fuzz on its bald head is rapidly baked off.

The Turkey Vulture will soar above the ground for most of the day, in search of a meal. They will use their excellent eyesight combined with a highly developed sense of smell to search out dead animals to feed on. They will not feed on live prey. You will often see along roadsides cleaning up animals hit by traffic or near lakes and rivers where dead fish have washed up. But contrary to popular belief, the Turkey Vulture does not feed on carrion alone. These birds enjoy plant matter as well foraging through shoreline vegetation and feeding on bits of crops such as pumpkin, apple, and grasses.

Turkey Vultures are a very gentle bird species. They are non-aggressive and non-confrontational having no natural enemies. They roost in large communities only to separate during the day to forage independently. They will return to the same roost day after day and have been know to return to the same roosting site annually for several decades if undisturbed. They have very few vocalizations, mostly limited to hisses and grunts. They will hiss when they feel threatened while grunting sounds are usually made by hungry juveniles or during adult courtship. They are often seen standing with wings spread wide open. This is called the “Horaltic Pose” and is believed to serve several functions. The Horaltic Pose helps to warm the body in the morning sun after a chilly night. A hot afternoon sun will aide in baking off any bacteria contracted while feeding. It is also used to dry the wings after a rain storm Turkey Vultures are very clean birds and are known to bathe and preen their feathers for hours.

Another unique trait is the vulture’s ability to vomit at will. When feeding they often gorge themselves to a point where flight is difficult. If approached by a predator or other disruption they will empty their stomach contents in order to take flight. At the nest if a predator nears they will cough up undigested lumps of meat. It is extremely foul smelling and usually enough to deter the most aggressive predator. If the predator is close enough to get the vomit in its face or eyes it will sting which aids in driving it off. Vultures do not projectile vomit as many have claimed.

The sophisticated immune system of a vulture is not completely understood. What is know however is that after feasting on dead animals loaded with bacteria from decaying in the hot summer sun there is no sign of disease or bacteria when the digested meat passes through them. Also any bacteria that cover the legs and feet after holding down their prey are simply washed away by the vulture directing its own acidic urine on its legs. This also serves as a cooling mechanism. In the summertime, wetting the legs cools the vulture as the urine evaporates.

The Turkey Vulture is by far the most wide spread of the New World Vultures. They can be found throughout the United States well into Canada and as far south as Central South America. They migrate out of their northern range to southern regions as freezing temperatures and snow cover make locating food difficult. These birds prefer open areas, but can be found almost anywhere. They live along coastlines; in deserts; throughout plains; and even in inland forests.

Turkey Vultures are monogamous and can survive in the wild for more than 40 years. If one partner perishes they will find another mate. Turkey Vultures nest on the ground under downed trees or in caves or dugouts. They do not construct a traditional nest but rather scratch out an indentation in the soil where 1 to 3 blotchy looking eggs will be laid. The eggs are incubated for 38 to 41 days by both parents. Once the eggs hatch it will be another 70 to 80 days before they leave the nest with both parents tending to their needs. The young vultures are covered in pure white down, and have dark grey faces. Once fledged the young birds still have darker heads than the adults, and can be confused with the black vulture, from a distance. Vulture nests are often found in abandoned farm buildings which provide safe hiding places similar to a cave or hollowed log. They will raise only one brood each year.

Turkey Vultures are protected under the International Migratory Bird Treaty Act. There numbers appear to be healthy, growing in recent years. Vultures are scavengers and are an essential part of the natural community preventing the spread of disease from dead animals.

· Turkey Vultures are one of the only birds in North America with a sense of smell. They rely both on keen eyesight and a powerful sense of smell to search out food. The part of its brain responsible for processing smells is particularly large, compared to other birds. Its heightened ability to detect odors allows it to find dead animals below a forest canopy.

· Contrary to popular belief, circling vultures do not necessarily indicate the presence of a dead animal. Circling vultures may be gaining altitude for long flights, searching for food, or playing.

· These birds soar on thermals of warm, rising air. This allows them to best conserve their energy in flight. After rising on the thermal, they glide as far as possible before they need to gain altitude again. This is also the method used during fall migratory when they move to southern regions. They also rely on thermals of warm air to  remain aloft while scanning the ground for food.

· You will certainly see vultures in the air over a carcass, but in the case of small carcasses, the descent is rapid. As for larger carcasses, while remaining on the lookout for food, vultures are equally attuned to their fellow vultures. They note when others’ behavior indicates the discovery of a food source, and will flock to the area. Often, the entire group will remain aloft until sufficient birds have arrived to dispose of the carcass in a timely fashion.

· The Turkey Vulture maintains stability and lift at low altitudes by holding its wings up in a slight dihedral (V-shape) and teetering from side to side while flying. It flies low to the ground to pick up the scent of dead animals.

· Turkey Vultures do not circle dying animals as pictured in the movies.

· A group of vultures has many collective nouns, including a “cast”, “committee”, “meal”, “vortex”, and “wake” of vultures.