The American White Pelican is one of the largest birds of North America measuring a little over 5 feet in length with a wingspan that can exceed 9 feet, the second lar

gest wingspan of any North American bird. They may be heavy reaching weights of 16 to 20 pounds, but in flight they are fluid and graceful and can soar as majestically as any broad winged bird.

White Pelicans are slightly larger than their cousins the Brown Pelican which is found along the Gulf Coast and up the Atlantic and Pacific waterways. The male and female look exactly alike with the male being the larger of the two. They are mostly white only showing the black primary and outer secondary feathers of their large wings when in flight. The juvenile pelicans are similar to the adult except for the dirty grayish markings on the head and back along with having a grey bill. The legs and feet are a bright orange. They have such a distinctive and unique appearance it makes identification relatively easy. However on occasion White Pelicans have been mistaken for Whooping Cranes when migrating high above in a loose V-formation or soaring on thermals.

White Pelicans breed in colonies on isolated islands of freshwater lakes in the upper Great Plains of the US and Canada and the mountain west. Wintering along the coasts they only breed on these inland freshwater lakes. They forage for food in large marshes, lakes, and sloughs along rivers that may be as far as thirty miles from the nest site. The nest is a depression scratched out among the loose stones and vegetation with the same debris lining the bottom of the nest where two white eggs will be laid. The parents will share the duties of incubating the eggs using their feet to keep the eggs warm due to the lack of a brood patch on their belly. After the hatch both adults will again share the parental responsibility of feeding and caring for the young. In the fall they will begin their retreat south where they will spend the winter on the Pacific and Gulf of Mexico coasts from central California and Florida south to Panama. 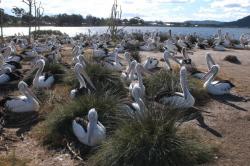 White Pelicans have reached about 100,000 in the wild with slight yearly increases. They are sensitive to human disturbances and may flush off the nest if frightened exposing the eggs to gulls and ravens. But the main threat to pelicans today is nest failure from flooding rains or prolonged drought, possibly a factor of climate change. Other threats include loses from entanglement in fishing gear, disturbances by boats, poaching, and human related habitat degradation.

White Pelicans can live up to 16 years with the recorded lifespan of a pelican in captivity exceeding 34 years. Unlike the Brown Pelican which will perform aerial dives into water to catch food, White Pelicans scoop up fish with their enormous bill at times making shallow dives. They are known to work as a cooperative group herding fish together to feast on with each bird consuming up to 4 pounds of fish every day.   It has even been recorded that within these cooperative flocks blinded adult pelicans have been kept alive presumably by other members of the group providing food for them.

White Pelicans have traditionally migrated through Nebraska and were sighted by Lewis and Clark during the Corp of Discovery.  On August 8, 1804, the expedition found a flock of several hundred white pelicans resting on a sandbar about two miles north of the mouth of Little Sioux River in present-day Burt or Thurston County, Nebraska, and Monona County, Iowa. One of these birds was shot and measured by Captain Lewis, and its throat pouch was determined to hold five gallons of water.

An estimate of 5,000 to 6,000 pelicans was made the same day by Private Whitehouse. Pelicans were also seen on the return trip, September 4 and 5, 1806, near the mouth of the Vermillion River, and within the river stretch from present-day Burt to Dixon Counties, Nebraska. A few were also shot on September 6 in what would become southern Burt County. Today a few white pelicans still use this dredged and highly channelized stretch of the Missouri River during migration to and from their North Dakota or Manitoba breeding grounds, but most migration now occurs in lakes and rivers farther west, where the waters are clearer and less swift.

Today White Pelicans are plentiful across all of Nebraska during the spring and fall bird migration from the Missouri River of eastern Nebraska to the marshes, lakes and prairie potholes in the state’s western panhandle. In the spring, when weather allows, adult birds will push on north to their breeding grounds. Many non-breeding pelicans will remain on the lakes and reservoirs of central and western Nebraska for the summer. These are generally juvenile birds that won’t reach sexual maturity until about four years of age. The juvenile birds that remain will form feeding groups of twelve or more working together to corral fish.

One of the largest concentrations of White Pelicans in Nebraska during the spring migration is at the Harlan County Reservoir in the south central part of the state along the Republican River. The pelicans begin to arrive in late February and early March. They will remain to hunt and feed until the second week in April when the adults will resume their trip north and the non-breeding birds will disburse in search of the summer’s prairie lakes where fish are plentiful.

Viewing the thousands of White Pelicans at the Harlan County Reservoir, along with many other birds, is relatively easy. They can be observed from many shoreline locations and parking lots around the Harlan County Lake as well from the marinas, RV and camp grounds, and the many walking trails near the lake.