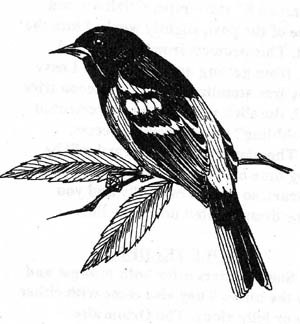 The male sings a loud flute like whistle that often gives away the bird’s location before any sighting can be made. The Baltimore Oriole received its name from the fact that the male’s colors resemble those on the coat-of-arms of Lord Baltimore, an important figure in Maryland’s history. The Major League Baseball team, Baltimore Orioles, were named after this bird and it continues to be their mascot. It is also the state bird of Maryland.
Adults Orioles have a pointed bill and white bars on the wings. The male is a beautiful, bright orange on the underparts, shoulder patch and rump, with a distinctive black hood, back, and wings. As with other blackbirds, the female Oriole has a different appearance than the male. The adult female is yellow-brown on the upper parts with darker wings, and dull orange on the breast and belly. These birds are 7 inches long with a wingspan of close to 12 inches and weigh a mere 1 ½ ounces.
Orioles are birds of woodland edges and open woods. They have adapted well to urban parks and suburban landscapes. They can be found in open urban areas with scattered mature trees. The nest is often built in an elm, sycamore, or cottonwood tree.

This Neo-Tropical migrant spends the winter months from Mexico and Central America to northern South America. Here they inhabit lush, tropical forests and feed on nectar, pollen, fruit, and insects. They especially favor coffee and cacao (the plant that chocolate comes from) plantations where these crops are grown in the traditional manner, the coffee and cacao shrubs flourishing under a shady canopy of natural forest trees. While in the tropics pairs of males and females form flocks of about ten individuals, although sometimes as many as 30 or 40 are in a single flock.

They return to their breeding grounds in North America in the spring where they spend most of the summer. They range from Nova Scotia west to British Columbia, south to southern California and Mexico, then east to North Carolina. Their arrival date in the spring varies, but in the Midwest and Central Great Plains we can expect to begin seeing them around the 25th of April. Then by August and September they begin their trip back to the tropics. These birds migrate in flocks to southern Mexico, Central America and northern South America. Peak migrations in Nebraska occur from April 25 to May 15 in spring and during August 15 to September 20 in late summer. Nebraska’s Breeding Bird Survey indicates that the oriole breeding population in Nebraska was expanding.

The male Baltimore Oriole gives six or seven loud whistles in announcing his territory and a loud, harsh chatter as an alarm call. Orioles are monogamous. In courtship they droop their wings and tails, then fan them while bowing their heads and whistling, finishing by fluttering in the air. It is then that the female Baltimore Oriole selects the site where she will construct the nest. This is usually on a tree branch that hangs over a clearing, often a street or county road. It takes her five to six days to weave a hanging, gourd-shaped nest about 5 inches long. Its outer shell is tightly woven of fibers stripped from weed stalks and inner bark of trees. Synthetic fibers may also be used. When providing nesting materials for these birds, such as string, thread, or yarn, make sure the pieces are cut in 6” to 8” lengths to prevent them from becoming entangled. After the outside of the nest has been finished the female will then enter the interior and bounce in the nest, using her breast to give it shape. As a final touch, the bottom is lined with plant down, grasses, or hair. The shape of the nest may help deter predators from eating the eggs or young because the eggs and young are hidden from view and the entrance to the nest is difficult to access.

Wingtips: Orioles are categorized with the family of blackbirds. Baltimore Orioles occur in Eastern Nebraska. Bullock’s Orioles can be found in Western Nebraska and interbreed where territories meet creating hybrids. Orchard Orioles are common throughout the state.

Once the nest is finished, the female Oriole will lay 4 to 5 pale grayish-white eggs that are streaked and blotched with dark lines. When the clutch is complete, incubation begins. In 12 to 14 days the eggs will hatch. The new chicks remain in the nest for another 12 to 14 days before they are strong enough to fledge. Orioles have one brood each season, but will re-nest if the first is destroyed. Although the female constructs the nest and incubates the eggs, the male assumes the duties of feeding the young along with the female. They feed insects to their young, at first by regurgitation, then transferring whole insects to them.

About half the diet of Baltimore Orioles includes gypsy moth larvae, grasshoppers, tent caterpillars, leaf beetles, and spiders making them a desirable bird for insect control. They are also fond of soft fruits and berries. People with fruit trees know it’s time to harvest those products when the orioles begin spending their time in the tree. They will also feed on green peas, mountain ash, and the seeds of garden flowers such as hollyhocks and sunflowers, and the nectar of tubular flowers.

All Orioles will often frequent bird feeders that are stocked with berries, grapes, orange slices and over ripened bananas. But grape jelly seems to be most attractive to them. Some will even learn to use hummingbird feeders which inspired the development of nectar feeders designed specifically for orioles. These birds have a special tongue, which resembles a brush, for lapping up nectar. Orange flavored, or fruit flavored suets will also attract them. To attract these beautiful birds to a feeder it is best to have these products ready for them prior to their arrival. Birds migrate at night, and when they arrive they are cold, tired and hungry. The first item on their agenda is to locate a food source. If you are ready for them, it will make attracting them much easier. In Nebraska we recommend having the oriole feeders ready by April 25th.