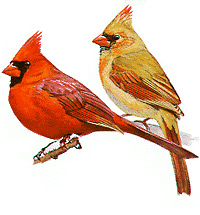 The Northern Cardinal has to be considered the most sought after bird to attract to the bird feeder. The sheer beauty of a pair of Cardinals in a snow covered tree or bush is a sight to be hold. And to see a dozen or more Cardinals is a sight not to be forgotten soon. One winter day we counted 38 Cardinals in the backyard after a blustery snow storm. The contrast of red on white in a green Cedar tree was captivating. Cardinals nest from 4 to 8 feet off the ground in thickets, tangles, evergreens and dense shrubs. If you live in a new development, plant shrubbery as part of the habitat as soon as possible. Shrubs and bushes grow very quickly and become mature in three to five years providing food, shelter, and nesting sites for Cardinals and other birds.

Originally a southern bird, the Northern Cardinal began expanding it’s range into northern states around the turn of the twentieth century. During the early days of this expansion they would migrate back south during the winter. But in time they began to remain in northern states during the winter months ranging as far north as Ontario Canada across to Northern Minnesota, and west into the Eastern Central Great Plains. Biologists attributed this range expansion impart to backyard bird feeding as well as an increasing population needing more space. The Cardinal thus adapted to foraging for food during the winter months, continuing the growth of their population, and further expanding their range westward. Although not common, there have been reports of Cardinals being sighted west of Grand Island, Nebraska into the Sandhills along riparian areas.

From September to April it is not uncommon to have numerous pairs sharing the same areas, especially where food sources are plentiful. But by early April they begin to setup house keeping and become very defensive of the site they have selected to call home. The male and female Cardinal will begin to sing to one another in the territory the male has selected during much of the day. The male will use several different songs, each with an intentional purpose. One song is produced to attract a mate. Another to establish dominancy in his territory, while yet another song is used to defend his territory against other males. These territories can be as much as five acres where there is one dominate male and female pair.

Where two territories meet, one male will perch in the top of a tree in the area he’s claimed. Across the way another male Cardinal will perch in the tree tops of his territory. They sing lustily at one another for several minutes before each male slowly starts to drop lower in their respective tree until they are finally out of sight. Their individual territorial line has now been established. These territories are very well etched into the minds of Cardinals, and they fear to cross another’s territory even to get to a well stocked birdfeeder. You will often see the dominate male chasing after another male that has entered his territory. He is very serious about driving the intruder out. When defending a territory, the male will drive off other males, and the female other females. Occasionally you may have two pairs of nesting cardinals in an overlapping territory provided their view is blocked by a house or other obstruction. But there will still continue to be one pair that remains most aggressive.

In late winter the Cardinal’s mating ritual begins as the male sings for his mate, becoming more tolerant of the female. He will bring her food and gently offer it to her. She will take this offering which may be setting the stage for the male to feed the young while she goes off to lay another clutch of eggs in a new nest. The female builds a cup nest in a well-concealed spot in dense shrubs or a low tree over a 4 to 5 day period while the male accompanies her. The nest is made of thin twigs, bark strips, and grasses, lined with grasses or other plant fibers. The eggs are laid from one to six days following the completion of the nest. The eggs are white, with a tint of green, blue or brown, and are marked with lavender, gray, or brown blotches which are thicker around the larger end. The shell is smooth and slightly glossy. Three or four eggs are laid in each clutch. The female generally incubates the eggs, though, rarely, the male will incubate for brief periods of time. Incubation last 12 to 13 days and, once they hatch, she will brood the young for 2 to 3 days after which both parents will feed the hungry group. The chicks will fledge after 10 to 11 days after which the male cares for and feeds each brood as the female incubates the next clutch of eggs.

The young fledglings all resemble the female when they leave the nest with the exception of their dark gray beak instead of the bright red orange of the adult. If the male fledglings sported the bright red colors of the adult male, they would be unintentionally driven off as if they were intruders. By the early fall molt you will begin to see their more distinct adult colors develop. Cardinals will have two to three, and even four, broods each year.

About 90% of the Northern Cardinal’s diet consists mainly of seeds, grains, and fruits. Their beak is cone-shaped and very strong. It is often considered a ground feeding bird since it finds food while hopping on the ground through trees or shrubbery. But it is more an opportunist, feeding where ever food is available. Cardinals will also eat beetles, cicadas, grasshoppers, and snails, but prefers wild fruit and berries, corn and oats, sunflower seeds, safflower, and peanuts. During the summer months, it shows preference for seeds that are easily husked, but is less selective during winter, when food is scarce. Northern Cardinals also will consume insects and feed their young almost exclusively on insects, including meal worms.

The Cardinal was once prized as a pet due to its bright color and distinctive song. In the United States, this species has received special legal protection under the Migratory Bird Treaty Act of 1918, which also banned their sale as cage birds. It is also protected by the Convention for the Protection of Migratory Birds in Canada. It is illegal to take, kill, or possess Northern Cardinals, and violation of the law is punishable by a fine of up to $15,000.00 and imprisonment of up to six months.

The oldest wild Cardinal banded by researchers lived at least 15 years and 9 months, although 28.5 years was achieved by a captive bird. Annual survival rates for adult Northern Cardinals have been estimated at 60 to 65%, however, as with other passerine birds, the high mortality of juveniles means that the average lifespan is only about a year.

Wingtip: The adult male will teach the fledglings how to forage for natural foods as well as seed offered in a bird feeder. Watch for the distinctive gray beak to identify the youngsters.

Cardinals prefer to face forward when feeding, so an adequate perching area is essential. Platform, hopper, and ground feeders work best. Seed tube feeders will attract Cardinals if a seed tray is used for them to perch on.