The Snow Geese, Sandhill Cranes and many ducks have passed through on their way to their northern breeding grounds. It was another exciting season viewing the geese and cranes, but migration is far from over. April is one of the three most exciting migration months of the year. We will once again welcome back many of our summer favorites to the yard; the brown thrasher, catbird, towhees and chipping sparrows to name a few. The Rose Breasted Grosbeak and Orioles are two of the Neo-tropical migrants everyone 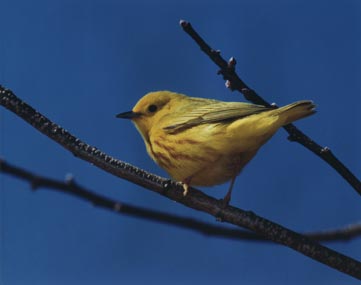 enjoys welcoming back. But at the same time we will be bidding our winter friends a fond farewell by months end until we see them return next fall. They have entertained us all during the winter months.

One of the most exciting events during the spring migration is seeing birds that are just passing through on their way north. About thirty species of warblers move through Nebraska such as the Yellow-rumped Warbler and Palm Warbler just toname a few. Several species of warblers such as the Common Yellow Throat and Yellow Warblers will remain to nest. There is always the opportunity to see warblers that accidently move through Nebraska such as the Hooded Warbler or Black-throated Blue Warbler, a real sight to see. But these vagrant warbler species don’t stay long so keep your eyes open. Many migrating bird species on their way further north will only be stopping off for a short stay before moving on. Swainson Thrushes are commonly seen as are Yellow-headed Blackbirds and dozens of other migratory bird species. Take along a field guide and binoculars with you wherever you go. Even a short drive through the country to grandma’s house can produce some exciting bird watching results. And those backyards with a little mature habitat can become a haven for migrating birds.  I always have my binoculars close at hand where ever I go.

At the Wild Bird Habitat Stores we encourage everyone to have a field guide as you never know what bird may appear or when. This will even help you enjoy the spring migration period more as you identify these birds. It is fun to be able to identify these new strangers as they arrive or pass through. And before you realize it you will gain a great deal of knowledge about birds. Many folks call us needing assistance with bird identification. It is helpful if the caller has a guide as they describe the mystery bird. We are pleased to help as soon you will be identifying these birds on your own adding great enjoyment to your birding experience.

By now you must have noticed the male Goldfinches slowly donning their canary yellow breeding plumage for the summer months after a long winter. It will be May before the northern Goldfinches that have been in our company all winter follow the Dandelion blooms back north, leaving us with our resident Goldfinches for the summer. By late June these resident Goldfinches will move from urbanized feeding grounds into rural country sides to nest. Since they feed their nestlings strictly seed they are late nesters waiting until there is a bountiful supply of seeds for their young. Those living in open rural areas will continue to enjoy flocks of these finches until mid-August when natural seeds like the native prairie thistles and sunflowers, a favorite of Goldfinch, ripen. 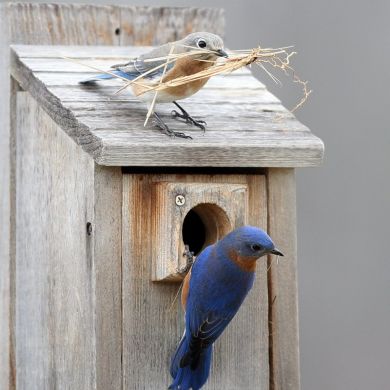 Bluebirds will get serious about their nesting as the weather warms and the cool winds subside. They have been checking out nesting boxes and soon many bluebirds will have nests ready for the seasons first clutch of eggs. But a cool rainy April could create wet nests and cold nestling.  This is just one reason if you have bluebirds to be sure you monitor their nest boxes. Many a well-meaning person will install a nest box without following-up to insure the birds are safe and successful.

Opening and checking your on tenants will not cause the nest to be abandoned. If you’re not sure how to monitor you bluebird nest boxes Wild Bird Habitat can provide you with that information. You can also get additional information on attracting bluebirds at Blue Birds Across Nebraska’s website: www.bbne.org.

Do you have the habitat for Purple Martins? Have you failed to attract Martins to your Martin house? Wild Bird Habitat can help. We will consult with individuals to make certain you have the potential to attract these highly sought after birds. We will not sell a Purple Martin house for the sake of making a sell. We want you to be successful. For a small fee we will even assemble and install Purple Martin houses. That said, it is time to get ready for these swallows, the largest of the family. Purple Martins that arrive early are often considered “scouts”. Most often these are adults with prior nesting experience that arrive early, most already having established colonies. The majority of Martins that start new colonies are immature birds that begin arriving in early April and will continue to arrive throughout the month. We have installed numerous houses as late as the third week of April with Martins establishing a new colony shortly thereafter. Want to know more? Contact Dave at the Lincoln Wild Bird Habitat Store. At Wild Bird Habitat you’ll find a complete line of Purple Martin Houses, accessories, and replacement parts.

The Orioles will be arriving by months end. Just another reminder to make sure you have your Oriole feeders ready by April 15. Just freshen the oranges, nectars, and jellies once in a while until they arrive. This is also a good time to be thinking about

hummingbirds which will be arriving the first week or so of May. Attracting these two Neo-Tropical migrants to a feeder is all about timing. If you are ready for them before they arrive you have a better chance of attracting them. That is not to say putting Oriole and hummingbird feeders out past that date will be unsuccessful. Orioles begin arriving April 16 and will do so until June 5 with the half arriving between May 1 to 10. These records are documented by Dr. Paul Johnsgard, Professor Emeritus School of Biological Sciences, UNL. For Ruby-throated Hummingbirds the earliest reported sighting was April 7 continuing their migration through until early June. The median arrival date however is May 5 to 17. Are they becoming accustomed to nesting in the Lincoln area. Several reports in recent years indicate folks feeding hummingbirds all summer long and bringing juveniles to the feeder. These are in riparian creek areas the reports come in from. The Ruby-throat does nest along the Missouri River and eastern Platte River

In spring we turn our attention to planting spring flowers and installing new landscape plants. Select those that will encourage birds and other wildlife to visit your yard. Carroll Henderson’s publication, “Landscaping for Wildlife” is designed for creating a wildlife habitat in our area. There are a number of UNL Extension NebGuides at ianrpubs.unl.edu/ to guide you and inform you about planting for wildlife. Also check out the Nebraska State Arboretum at www.arboretum.unl.edu/. They have some great information as well as selling many plant materials.  Don’t just landscape your yard, “birdscape” it. 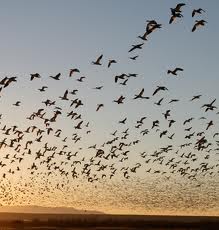 The spring migration of birds is an incredible phenomenon that is unequalled by any wildlife on the planet. From the short distant migrants to those long range migrants, generations of bird species will return to their same breeding ground, often within a few hundred yards, year after year. Many male birds arrive first and wait for their monogamous mate to show up, sometimes several weeks later. Others perform exotic displays to attract a new mate for the season. Using stars, landmarks, and electro-magnetic fields, they imprint these exact routes, which are from a few hundred miles up to more than ten thousand miles, on their young. In fact it is the Arctic Tern that migrates the farthest from the Sub-Arctic to the Antarctic and back, a round trip in excess of 25,000 miles. It has occurred year after year for thousands, if not millions of years. In the spring they don their bright breeding plumage and perform courtship rituals that are choreographed to perfection. Don’t miss the opportunity to witness this incredible springtime event.  Keep a good eye on your backyard for new arrivals, but take the time to venture out to the many birding sites in your area. Remember…see to look and look to see. Nebraska is one of the premier migratory locations on the continent. At Wild Bird Habitat we have free guides and brochures to help you locate near-by birding sites.