May is the premiere month for songbird migration. Warblers, thrushes, and all the other Neo-tropical birds will be coming in to spend the summer, or passing through on their way to northern breeding grounds. The best part is they are all in their brightest colors, or breeding plumage. If you enjoy warblers, you know how brightly colored these birds can be. These little beauties are much easier to identify now than in the fall when they return in their basic plumage which can be confusing. Those who live in city neighborhoods are equally able to witness many of these migrating birds, even if you have minimal habitat. The majority of these migrants are not in your yard to feast on the seed in your feeders. They are gleaning for larvae that wintered over and the emerging insects of spring.

One of the best methods to attract many of these migrating birds is a water feature on the ground where the water is moving over a falls, from a bubbler, or out of a dripper.  We have an avian creek in our backyard that cascades over two waterfalls. During one migration season my wife and sat on the patio and in 45 minutes identified 17 different bird species. We have even witnessed some very rare birds to this area as the Hooded Warbler and in the past couple of years have been visited by a Black-throated Blue Warbler. Creating a simple avian pond with a water fall or rock bubbler is easy and a great weekend family activity. Such a water feature is inexpensive, easy to maintain, and can be operated year round. Although the size of such a water feature is irrelevant, the results are spectacular. Ask Dave at Wild Bird Habitat for more information.

Living in the center of the United States, and especially in the Central Great Plains, migration becomes a very exciting time. Many of the birds that winter in the tropics and southern United States pass through a bottle neck in Mid-America before spreading out across the vast expanses of the North American continent. That bottle neck passes right through Nebraska utilizing the Central Great Plains flyway and the Missouri River flyway. If you live in Nebraska, you’re in the middle of a birding migration  paradise. Watch the woodlands for a variety of migrating songbirds, the wetlands, mudflats, and prairie potholes for more than 36 species of shore birds, and the grasslands for some of the largest remaining populations of grassland birds. Many will stay to nest. Others will spend a few weeks before moving on.

The other side of the migration story is that all of our winter visitors will be leaving, headed back to their northern breeding territories, many to the Boreal Forests of Canada. One bird we all missed this year was the Red-breasted Nuthatch. They must have had an abundant food supply in the North Country so there was no need for them to drift south into our area looking for resources. However, heavy snows in the Dakotas and Southern Canada afforded us a large population of northern Goldfinch this winter. We also saw a good number of Pine Siskins. They will be feeding heavily at the thistle feeders until the dandelions ripen. They will then follow that bloom back to their nesting territories to the north feeding on those delicate seeds. Once they leave we will still be able to enjoy our resident population of Goldfinch until late June when they will move out into the countryside to nest. We will talk more about that in Wild Bird Habitat’s June newsletter.

Supplying nesting materials is always welcomed by our local nesting songbirds. Wild Bird Habitat has prepackaged nesting materials which include feathers, or one can just cut short pieces of yarn and string. Hair is a prize for many nesting birds to line their nests with. We discourage using dryer lint as it has a tendency to hold moisture and can cause problems for naked nestlings. If you live in rural areas where Tree Swallows nest, put out some feathers. You may even enjoy holding the feathers in your finger tips and letting these swallows snatch them from you. All Tree Swallows line their nests with 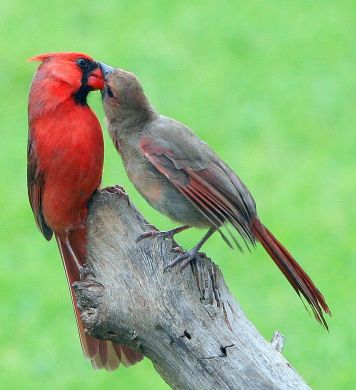 feathers, and offering them a few is always a lot of fun.

Those birds which nested early will soon be bringing their young to the bird feeders. Research has shown that the availability of supplemental foods offered at bird feeders has helped many of these birds nest quicker and have more successful nestings. The reason is less time is spent foraging fordwindling food resources after the winter months. It will be middle to late summer before a good supply of natural food becomes available, so keep those bird feeders stocked. It really provides some benefits. And keep the suet feeders filled. Woodpeckers consume much more suet in spring and early summer than all winter long, and will bring the young to it for a treat. One year I had a male Downy Woodpecker take suet from a suet feeder and wipe it in a knot hole on a tree where the two young Downy fledglings feasted.

Wingtip: All young Cardinals that hatch have the appearance similar to the plumage of a female when they leave the nest. They are best identified as first year birds by their gray beak which will slowly change to orange.