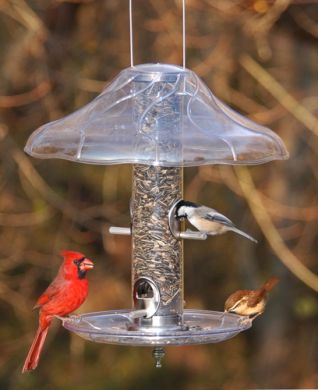 Our bird feeders are certainly a source of relaxation and enjoyment as the weather allows us to sit on our decks and patios. Already we are seeing adult birds appearing with their young in tow begging to be fed. It may seem a bit early to see young jays, Cardinals and woodpeckers, but the mild end to winter and warmer than normal spring in the Great Plaines allowed many birds to nest early.

The other beneficial factor for birds that has been recorded in numerous research projects is that birds will nest earlier and nest more successfully when supplemental foods are offered such as at bird feeders. After all many natural foods have been depleted and it will take an entire growing season to replenish those resources. When supplemental foods are available to birds there is less time spent foraging and competing for what is left from the previous year. This allows them to focus more on territorial defense, building nests, and rearing their young which takes a tremendous amount of energy.

The mild weather may have also led to the early departure of many of our resident winter birds such as the Juncos and northern population of Goldfinches. They seem to have departed several weeks earlier than normal. It also appears as if many spring migratory birds that settle down in our area waiting for winter to subside in the north were able to continue moving on to their summer ranges. Fewer bird species and numbers of migratory birds passing through were seen. Weather and food resources play an important role in bird movements and their activities.

Although the birds seem to be quite busy at the feeders and it is a pleasure to watch them, at Wild Bird Habitat we would like to encourage everyone to take the time and look beyond the bird feeders during the summer months. There are many other birds that have arrived in our area to spend the summer that may visit our yards or soar over our towns and neighborhoods with little concern for the feeds we provide their avian cousins. From Chimney Swifts to kingbirds, flycatchers to swallows, many of our summer birds are well worth taking the time to observe and enjoy. The diets of these birds consist of insects that can be bothersome to us and to our gardens. These aerial birds not only provide us a great service by hawking for insects but can greatly entertain us with their skillful acrobatic maneuvers. We should certainly acknowledge their presence and promote their conservation. 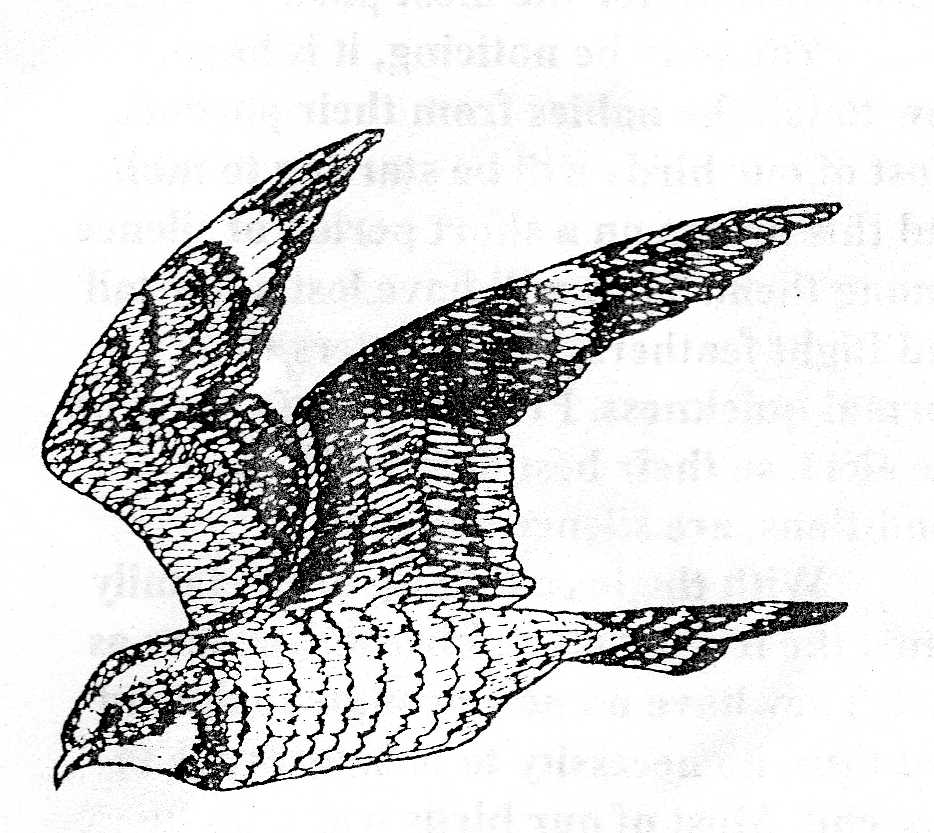 Another summer favorite is the Common Nighthawk. Not a true hawk by nature, but a voracious insect eater. They can be seen flying above the city lights on a hot summer’s night consuming mass quantities of mosquitoes, beetles, and other flying six legged creatures. Often all that is visible in the dark sky from below are the two white bars on the under wings illuminated by the street lights. But its hawk like call as it hunts the night sky can be easily heard as it reminds us of the natural world that lies just a short distance beyond the theaters and restaurants of a busy city.

So take the time this summer to explore and enjoy the other birds that share our space apart from those at our backyard bird feeders. They will only be here for a few short months just long enough to rear a family then they will be gone. Winter may be the farthest thing from our mind as summer does not even officially arrive until June 21st, but for our summer birds time is of the essence. By August many birds are already preparing for the return trip south.

By mid-June Goldfinches will drift into the countryside in preparation for their nesting season. This is why many folks in urbanized areas may only see an occasional Goldfinch visiting their feeders during the summer. These are probably birds that were unsuccessful in finding a mate and remain close to a known food source. However homeowners who live in rural or open areas will continue to have a good number of Goldfinches at their thistle feeders until late August. By then these finch will turn their attention to the many natural foods that have ripen. 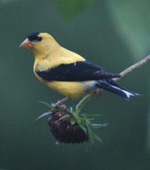 Goldfinches are late nesters due to the fact they do not feed their nestlings insects, but only small thistle like seeds. Nesting mid to late summer assures there will be an ample supply of seeds to feed their young. Another late nester is the Cedar Waxwing, undoubtedly because they are waiting until the first crop of berries and other fruits to mature. These late nesters are also waiting for the proper nesting material to become available. Goldfinches build a tight grassy nest in small trees or bushes then line the nest with down from a variety of plants. Their nest is constructed so tight that when it rains the parent must be on the nest to prevent the nest from filling with water floating the eggs out or drowning the nestlings.

You may have noticed an increase in House Finches at your feeders. The males have a bright red head and chest while the female has a striped breast but lacks the red coloration. They seem to be more abundant at bird feeders during the spring and summer than they are during the winter months. These finches will continue to feed at the thistle feeders throughout the summer but are extremely fond of safflower seed. They can often be found nesting baskets of flowers hanging under porches or other protected areas. You may even discover them nesting in decorative wreaths on front doors. They often compete for the best perch on a feeder scolding one another and flittering about.

As mentioned earlier we hope you keep vigilant for adult birds that will be bringing their newly fledged babies to the bird feeders. No doubt many have already witnessed the first crop of grackles and starlings, and their deafening squawks. But the best is yet to come. You can easily recognize Cardinal who just hatched this year by their gray beak. All young Cardinals will have the same plumage as the female when they leave the nest. If the male fledglings sported the bright red colors of an adult male when they left the nest they may find themselves challenged by the adult male or other male Cardinals in the area as an intruder. The male Cardinal will assume the responsibility of feeding the young as the female goes off to raise another brood. It will be late August before these youngsters’ beaks begin to turn the bright orange of the adult and you will begin to distinguish their gender.

If you watch your backyard closely you will begin to notice many other first year birds. In fact, most birds that have recently fledged from the nest are easily identified by the common characteristic of fluttering wings and open beaks as if to say, “Feed me” “feed me”. Their parents will busily take morsels of feed from the feeders to satisfy them.

Suet during the summer months is always a treat for the woodpeckers. After all it takes a lot of energy to defend a territory while raising and feeding a family. Woodpeckers will consume 30% more 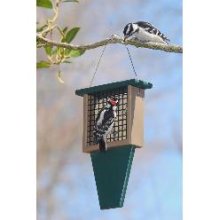 animal protein during the summer months than all winter long so keep the suet feeders filled. It is common to see immature woodpeckers near the suet feeder as their parents feed them. You’ll be entertained watching these youngsters trying to figure out how to feed on the suet, especially if it is an up-side down suet feeder. It won’t take long for them to figure it out.

I even witnessed an adult male Downy Woodpecker take suet from the feeder and wipe it into a knot hole of a tree. This may have been these young birds first lesson about foraging for food around a tree trunk.

Feeding mealworms can add some excitement to your backyard bird feeding. Bluebirds will readily take these live worms when they are placed in a dish on the ground near their nest box. They will collect them and return to the box to feed the nestlings. But what if you live in an urbanized area where bluebirds don’t nest? Well! You can still ad them to your backyard bird feeding program. Robins, Cardinals, Jays and others will enjoy them as well. You can just toss a few on the patio, or put them in a dish. Just remember, when feeding mealworms, ration them. Think of it as a daily treat for your birds.

Keep bird baths cleaned and filled with fresh water. Not only is it vital that birds have water to drink, but to bathe in as well. It is also very amusing watching young birds attempting to figure out just how to go about taking a bath. They are just not quite sure at first. You can keep your bird bath replenished with fresh water during times of high usage, or when hot weather speeds up evaporation by adding a dripper to the bath.

You can enjoy woodpeckers and smaller birds even more with a caged bird feeder from Wild Bird Habitat. These feeders prevent grackles, starlings, and squirrels from raiding the food yet are easily accessible to woodpeckers, finches, Chickadees, nuthatches and others. Caged birdfeeders are one of our most popular summer feeders. Add an elevated platform feeder and a ground bird feeder with safflower seed for the Cardinals and you’ll have an exciting summer bird feeding program.

Now is a good time to plant flowers which will attract the hummingbirds on their return trip south which begins as early as the first week of August. When selecting plants choose those plants which have “tubular” shaped blooms. They contain a higher content of nectar and are why hummingbirds have the long bill and tongue adapted to extract the nectar that provides the carbohydrates required to fuel their high energy consumption. Red Salvia is a favorite.

But don’t limit your plant selection to those that are attractive to hummingbirds. Plant fruit producing plants such as service berries, dogwoods and viburnums. Fruiting crabapple trees that hold their fruit until late winter attract Cedar Waxwings, American Robins and others. June berries, elderberries and goose berries are some of the bushes you can use the fruit for wines, pies and jams and share the balance of what you don’t harvest for the birds. But that’s not to say the birds will be willing to share the fruit with you. The Nebraska Cooperative Extension has several publications on wildlife landscaping. The Nebraska State Arboretum has numerous other resources on wildlife plantings as well as Carroll Henderson’s acclaimed book on “Landscaping for Wildlife” available at the Wild Bird Habitat Stores.

The goal of Wild Bird Habitat is to provide quality products and information to help families and individuals enjoy birds more. To learn about these fascinating winged creatures which are extremely diverse in appearance and habits. And I truly encourage you to look beyond the bird feeders to find added enjoyment in all the birds that are part of our natural world.