Skip to content
The White-breasted Nuthatch (Sitta carolinensis) is a small songbird of the nuthatch family which breeds in old-growth woodland across much of temperate North America. It is a stocky bird, with a large 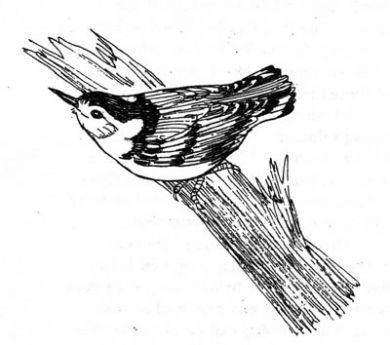 head, short tail, powerful bill and strong feet. The upperparts are pale blue-gray, and the face and under parts are white. It has a black cap and a chestnut lower belly.

The White-breasted Nuthatch has the inherent comic personality of the song bird world. Their animated herky-jerky movements through the trees remind us of an accident looking for a place to happen. They sport huge but strong feet and are able to race up and down tree trunks and even walk on the under sides of limbs. A common pose is a frozen stance on a tree trunk, especially if they suspect imminent danger.

These active little birds are not very friendly with each other except during the mating season. This union of pairs may begin as early as January. The White-breasted Nuthatch is monogamous, and pairs form following a courtship in which the male bows to the female, spreading his tail and drooping his wings while swaying back and forth; he also feeds her morsels of food. The nest building often starts in April or May. The nest cavity is usually a natural hole in a decaying tree, sometimes an old woodpecker nest, and occasionally an artificial nest box intended for the Eastern Bluebird. The breeding pair may smear insects around the entrance as a deterrent to squirrels. This nest hole is usually 10 – 40 ft high in a tree and is lined with fur, fine grass, and shredded bark. The clutch is five to nine eggs which are creamy-white and speckled with reddish brown. The eggs are incubated by the female for 13 to 14 days prior to hatching and the chicks fledge after another 18 to 26 days. Both adults feed the chicks in the nest and for about two weeks after fledging. The male also feeds the female while she is incubating. Once independent, juveniles leave the adults’ territory and either establish their own territory or become “floaters”, unpaired birds without territories.

The diet of the nuthatch in winter may be nearly 70% seeds, but in summer it is mainly insects. The insects consumed by the White-breasted Nuthatch include caterpillars, ants, and pest insect species. You will find them in wooded rural areas and in urban neighborhoods with mature trees near by. Around bird feeders, the nuthatch is very entertaining. They prefer peanuts, sunflower, and safflower seeds and suet, which have a high fat content. They will place seed items in the crevices of tree trunks, and then hammers them open with its strong beak. Often surplus seeds are cached under loose bark or in crevices of trees. Occasionally they drop a seed and can sometimes catch it even before it hits the ground. They are also very fond of suet. With their acrobatic abilities, almost any kind of bird feeder is within their comfort zone. A number of displays are used towards others of their kind and even toward other species of birds. You will notice much fanning of their tail and wings, which may intimidate other nuthatches, but have little effect toward other birds of an equal or higher pecking order.

The familiar “Yank Yank Yank” call of the White-breasted Nuthatch is a pleasant one to those who feed birds as it is always a pleasure to welcome this little guy to our yards. Nuthatches are generally tame little fellows who can be taught to eat out of your hand with a little patience. The White-breasted Nuthatch often travels the woods with small mixed flocks in winter. These flocks are led by titmice and chickadees, with nuthatches and Downy Woodpeckers as common attendant species. Participants in such flocks are thought to benefit in terms of foraging and predator avoidance. It is likely that the attendant species also access the information carried in the chickadees’ calls and reduce their own level of vigilance accordingly. These loose groups will commonly be joined by the Red-breasted Nuthatch in the Midwest and Central Great Plains during the winter months.

The population of the White-breasted Nuthatch seems to be stable. Although adults and young nuthatch may be killed by hawks, owls and snakes, their biggest challenge is the clearing of forests and woodlands which may lead to local habitat loss. But this is a common species with no major conservation concerns at this time over most of its range.