Some people have reported fewer Goldfinches since the temperatures have moderated a bit. We aren’t certain what causes some birds to abandon what seems to be a well-protected area where we have provided their favorite foods. This may remain a mystery until we begin thinking like birds. But for those that may have been lacking Goldfinch at their bird feeders it will be resolved soon. By the second week of March our resident Goldfinch that drifted south in the fall will be returning. The northern population of finches that have been at feeders during the winter will remain here until the first part of May. So prepare yourself for an exciting time of feeding hordes of Goldfinch, and watch as the canary yellow colors of the males begin to appear through their winter plumage.

The migration of birds heading north began with hawks and eagles in January. A warmer than usual February has begun to free area lakes from winter’s icy grip and we’ll soon see many ducks and geese began arriving. Many refer to Robins as the harbingers of spring but they normally begin arriving in February showing up in parks and backyards. The bird I have observed arriving the closest to March 20th, the first day of spring, is the Turkey Vulture. At least in our area. But March is when the spring bird migration really shifts in to gear. Many birds will have molted into their breeding plumage and the songs of courtship will fill the air. First to arrive this month is our resident Goldfinches, the Red-winged Blackbirds, Meadowlarks, bluebirds and Common Grackles. We will also see a variety of native woodland sparrows. Sandhill Cranes will be at the height of their annual pilgrimage through Nebraska, and Prairie Chickens will become active on the booming grounds. If the weather is good, by months end we will see Tree Swallows and Purple Martins arriving. Spring migration continues into April with shorebirds arriving followed by songbirds which will include warblers and various Neo-Tropical birds. Many birds will return to Nebraska to nest while others will spend time resting and feeding before continuing on to their summer nesting range. It is a very exciting time in the avian calendar. 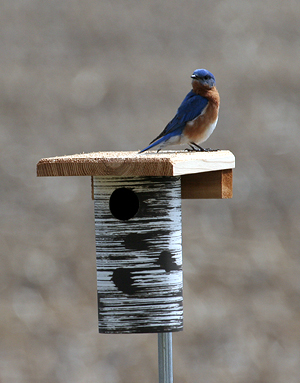 While many folks had bluebirds winter over along with their cousins the American Robin, our main resident population of bluebirds will be returning this month. Make certain your nest boxes are cleaned out and any repairs are made. Although they do not begin nesting in earnest until early April, many will be checking out nesting sites with a few getting an early start by mid to late March. If you have never kept records of the bluebirds nesting in your boxes we encourage you to do so. This information is beneficial in Nebraska’s bluebird recovery program and is tracked by Bluebirds Across Nebraska. Ask the staff at Wild Bird Habitat or visit Bluebirds Across Nebraska at www.bbne.org.

Bluebirds are relatively easy to attract into a nest box, provided you have the proper habitat. Nebraska has the most successful bluebird recovery program in North America. At the Wild Bird Habitat Stores we stock a full line of bluebird nest boxes approved by the North American Bluebird Society and the information you need to become a successful bluebird landlord.

March is the time to get other nesting boxes and bird houses cleaned out, repaired, and ready for the upcoming nesting season. Many cavity nesters will be setting up housekeeping by months end. This includes not only bluebirds but Chickadees, Wood Ducks, and returning Purple Martins. Even though House Wrens won’t be arriving until the first week of April, it’s still a good idea to get their quarters ready now. House Wrens, Chickadees, woodpeckers, Purple Martins and Screech Owls are birds you can attract into a nest box in urbanized areas. On community edges, acreages, and in rural areas you can add bluebirds, Tree Swallows, and Wood Ducks to the list. If you’re installing houses for birds for the first time, make sure you select the appropriate size house for the bird you intend to attract, and that it is in the proper habitat. If you have any questions, ask us at the Wild Bird Habitat Store.

Many people enjoyed watching the woodpeckers, nuthatches, Carolina Wrens and an occasional Chickadee at their suet feeders during the winter. But did you know these birds, especially woodpeckers, will consume more suet from March through late summer than they do all winter long? You may even see Orioles, Tanagers, and a few migrating birds feeding on suet. I suppose it’s because this is the time of year birds need extra energy for courting, defending their territory, and nesting activities. So keep the suet feeder stocked and you could very possibly be treated to a visit by some first year woodpeckers.

Wild Bird Habitat encourages everyone to make plans today to experience the spring bird migration. Take a day trip to see the Sandhill Cranes on the Platte River or millions of waterfowl in the Rainwater Basin. Spend an early morning watching birds at the Pioneers Park Nature Center or other wildlife management area. Keep alert for migratory birds arriving or moving through your backyard. Bird migration is one of our planets most spectacular natural phenomena’s that occurs all around us. It is the easiest wildlife viewing opportunity for all ages and all levels of birding experience.