The Eastern Screech Owl is our smallest resident owl. It has such an eerie call that Nebraska Game and Parks receives numerous calls from people who wonder what it is. This owl has a whinny type 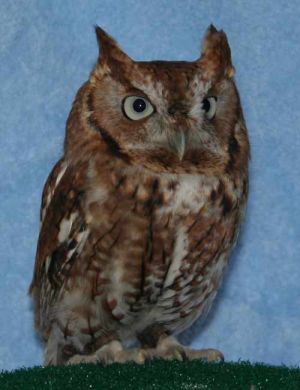 call followed by a monotone tremolo, all in one pitch. The eastern screech owl is a very nocturnal bird. If seen during the day it is often sleeping or at rest. In the summer it will roost among the dense foliage of trees and shrubs to hide from predators and mobbing birds. During the winter when cover is less available they will resort to roosting in evergreens and cedars. It is not uncommon for them to seek shelter during the winter in natural cavities and nest boxes. One spring I removed 3 inches of owl pellets from a wood duck box at the nature center where a screech owl had spent the winter. This screech owl is common east of the Rocky Mountains and found in rural woodlands, and urbanized backyards and city parks. In fact they are found where ever there are trees for nesting and will even use nest boxes installed in backyards. They are masters of camouflaged hiding out in the nooks and crannies of trees during the day. They are more often heard than seen.

Screech owls are 6 to 10 inches with the female being the larger of the two. Weighing an average of 6 ounces they have a wingspan of up to 24 inches. They come in two color morphs, red and gray. In the gray phase the owl is a gray-brown with gray vertical stripes, barred wings and tail with spots on the under-parts. The feathers on the legs are a buff color. They have bright yellow eyes and a gray green beak. The patterns of the red phase are similar except they are a cinnamon color instead of gray. While western screech owls can be confused with their eastern counterpart, the easiest way to determine the difference is the beak. Eastern Screech owls have a gray-green beak while the western species have a gray to black beak.

The gray phase appears to be more dominant in the northern states while southern screech owls tend to be more the red phase. There is one theory that gray birds may be more tolerant of cold weather than their southern cousins the red phase screech owls. This may be why in Nebraska we see more of the gray phase. It may also have to do with their ability to blend in to the particular vegetation that occurs in the habitats where they are found.

Courtship and nesting normally begin in March. They are cavity nesters but cannot create a cavity themselves. They rely on rotted out holes in trees, old woodpecker cavities, or those chewed out by squirrels. They will readily nest and roost in man-made nest boxes provided the entrance opening is adequate for them to pass through. Nothing will be added to the chamber but what already exists. The female will settle down into what debris is on the bottom and lay 4 to 6 white eggs.

It is the chore of the female screechy to incubate the eggs which will take up to 30 days before they hatch. During this period the male will feed her on the nest. Occasionally if she temporarily leaves the nest the male may enter. But without a brood patch it is doubtful he provides any incubation time on the eggs. Once the eggs have hatched the female will continue to brood the nestlings until their eyes are open and they grow enough feathers to protect them from the chilly nights. But it will be yet 4 weeks before the owlets leave the nest cavity and begin perching on nearby branches exercising their wings. Sometimes a little owlet may fall to the ground but with the parents encouragement they can climb back up to their perch using their beak and talons.
The male is a good father. Not only does he care for the female while she incubates the eggs, but will feed the young as she broods them and continue to do so once they have left the nest. The parents will feed the owlets until the young birds begin short hunting adventures eventually becoming capable of feeding themselves. This family group will remain together throughout the summer until fall when the young birds will disperse to locate their own territories before winter.

Eastern Screech-Owls have a diverse diet. They will feed on most small mammals, birds, and snakes but also earthworms, large insects, tadpoles, frogs and lizards. Their dinner may even include a bat. But do not be mistaken by their size. Although they are much smaller than their cousin the Great-horned Owl, ounce for ounce they are just as ferocious. They have been known to take on prey much larger than themselves during hard times. On the other hand Eastern Screech Owls will cache food away in cavities for short periods during times of abundance.

Eastern Screech Owls are most active at night. They hunt at dusk and dawn as low light levels help them spot prey. During the night in total darkness they will rely on their hearing to locate food. Occasionally they may hunt during the day. They will sit on tree branches six to ten feet above the ground and wait for prey to pass underneath. They can snag an insect on the wing, or drop talons first into shallow water for frogs and crayfish.

They make short flights when moving around traveling between perching sites. Most flights are less than 100 feet. They drop off from one perch, fly straight, and then fly up to the next perch. Almost in a U shape pattern. 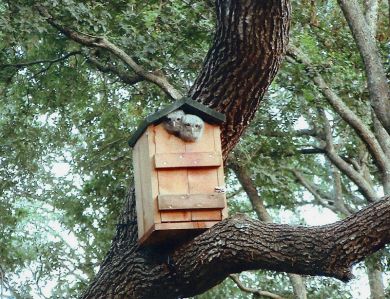 Any habitat with sufficient tree cover will do for this for Screech Owls. Dead trees or branches with existing cavities or nest boxes are essential and fairly open understories are preferred, but Eastern Screech-Owls live and breed successfully in farmlands where trees are sparse and have adapted to suburban landscapes, and city parks as well. On the Great Plains, at the westernmost edge of its range, Eastern Screech-Owls occur in the uneven traces of wooded land along streams and rivers. Screech-owls cannot survive if all trees are removed, but the species readily recolonizes once trees are replanted, especially if nest boxes are also provided.

Many folks probably have Screech Owls visiting their yards at night. If you filled you bird bath in the evening and it is empty in the morning, it may have been a screechy had a nice bath. Otherwise they leave very little sign they were there. You will not hear them flying as owls are totally silent in flight from special feather adaptations. But listen in the late evening or early morning and no doubt you may hear a Screech Owl calling.

Wingtip: If you come across a young Screech owl on the ground don’t be alarmed. Unless the owlet is in imminent danger from predators or human activity or is injured, leave them alone. The parents are nearby and will take care of the youngster. Keep an eye on it until it reaches safety. If you must take action place the young bird in a cardboard box or large paper grocery sack and contact Raptor Recovery Nebraska at (402) 994-2009. You may also call either Wild Bird Habitat Store or Animal Control. Never attempt to take care of any wild bird yourself.