The Eastern Bluebird is one of three varieties of bluebirds that are native to North America. The other two are the Mountain Bluebird and the Western Bluebird. These two bluebird varieties live in areas true to their names, far to the west of us. The Mountain Bluebird however can be found nesting in western regions of Nebraska and occasionally Central Nebraska. But it is our lovely eastern variety which typifies the bluebird of songs and poems, passed down through our history, and commonly referred to as the bird of happiness. Those who are fortunate to have them nest near their homes will readily agree that they are a blessing to have in the area. Just the sheer beauty of the male reflecting in the sunlight is a joy to behold.

The eastern species is 6 to 8 inches long with a wing span up to 12 inches. Male Eastern Bluebirds have a brilliant blue head, back and wings with a warm brick-red breast and white under parts. The female is lighter blue with a buff colored breast, white eye ring and under parts. The blue highlights in the wings and tail give the grayer females an elegant look.

Bluebirds begin returning to their nesting territories in early March across the Midwest and Central Plains. A territory is established and by the middle to the end of the month nest building will begin. They may seem serious about their nest at first, but if bad weather occurs they may abandon it at times for several weeks. When the weather warms and the sun returns so does the pair. The female will construct the nest in about 4 to 5 days, normally with token help from her mate in the form of some nest material. She will also do the incubating since the male bluebird does not have a brood patch. Careful studies have proven, however, that a male may spend the nights in the nest hole along side his mate.

Once the nest has been constructed the female will lay 4 to 5 light blue eggs over a period of a few days. Once the clutch is complete she will incubate the eggs for 13 to 16 days before they hatch. During this time the male will bring food to her at the nest. Once the eggs have hatched he will continue to feed his mate, as well as the recently hatched nestlings, for the first few critical days of brooding. When the young can finally be left alone for short periods the female will join the male in the feeding chores. As the young chicks prepare to leave the nest the female bluebird begins a second nesting. The male will continue the duty of feeding the nestlings until they are capable of securing their own food. This process can take 2 to 4 weeks. Once the newly independent youngsters have fledged the old nest they are sometimes seen bringing food to their new siblings at the second nest. I guess this is one of the many reasons they are revered by so many of us as they form a family group. This family group often continues into the fall and at times they may even stay together through winter until the following spring. Bluebirds will nest twice each season in the Midwest and the Central Plains States, while further to the south they may have up to 3 broods of young each year.

For those willing to become a bluebird landlord they will be graciously rewarded by their tenants. But as with any landlord there are certain responsibilities one of which is to maintain the house until the desired renters move in. This requires regular inspections of the nest box to see who will be using it by checking to see what nesting materials are being place inside the box. The Eastern Bluebird nest is very elegant and clean, constructed of fine grasses in a uniform cup shaped bowl. A similar nest if lined with feathers is that of a Tree Swallow. A nest of entirely small twigs is the House Wren. Chickadees build a taller nest of fine grasses and moss and will conceal the eggs under mosses and grass when away from the nest. House Sparrows on the other hand build nests out of a variety of mixed materials. They will pack the box completely full of coarse grasses, many with the seed heads still attached, bits of paper, plastic, and other debris and create a dome over the top. If you find a nest of mixed materials and grasses with seed heads, its best to remove it. This will keep the nest box available for bluebirds. It is important to monitor the nest box to evict House Sparrows and check on nesting bluebirds. Once the young bluebirds have fledged, clean out the old nest. This will encourage the bluebirds to nest a second time.

Bluebirds are valuable allies to humans as they feed on a variety of insects that are considered pests. They will also feed on fruits and berries when they become available. Many folks treat their bluebirds by offering them mealworms. When they have young in the nest the adults will take the mealworms back to the nest to feed their young. During the winter months they rely mainly on a staple of fruit to survive until the spring brings back a renewed source of insects. Bluebirds have been seen during many of the annual Christmas Bird Counts. They are generally found close to cedar groves which provide an abundance of food and shelter. Many times there is a nearby source of water. This may include a simple bird bath kept open with a bird bath heater. Family groups of bluebirds will cluster up during cold weather. 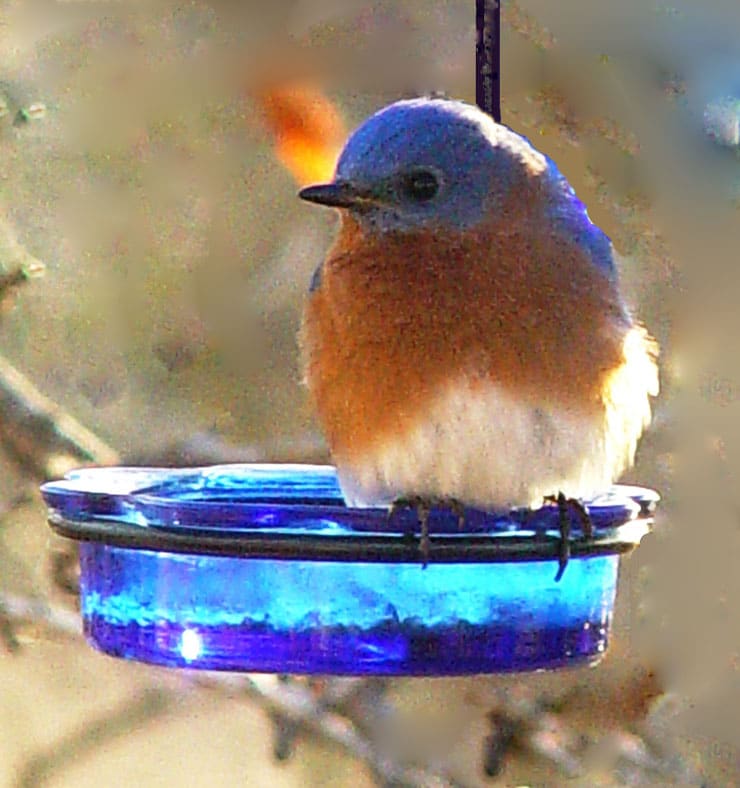 While some bluebirds drift south during the winter months there are many reports of bluebirds remaining during the winter in Nebraska. I suppose you would consider them partial migrants much like Mourning Doves. Some stay, some leave. Believe me, they would not be here if they didn’t have a food source and water. And many folks enjoy giving them an occasional treat of a few mealworms throughout the winter.

Their pleasant warbling song is a comfort to hear each spring as they arrive about this time of year. They act like tiny hawks in their slumped, haunting position, waiting patiently for an insect or beetle to show itself on the ground. It will then pounce on it and carry the prey to its hunting perch where lunch will be had. During early spring and if colder temperatures return, bluebirds may feast on sunflower kernels and various suet mixtures to carry them through the leaner times.

The House Sparrow (English Sparrow), a bird species that was introduced into North America in the 1850’s, is a relentless enemy of the bluebird around the nest box. The best practice is to locate the bluebird box in an area where house sparrows don’t congregate. You should place the box away from buildings and bridges to help assure the bluebird of a safer nesting area. It is also best to avoid heavily wooded areas where house wrens, another aggressive cavity nester, will readily evict the bluebird adults and eggs and take over the box. The ideal location is in an open area with grasses. Shorter grasses, or mowed areas make finding insects a lot easier as many bluebirds will use the roof of the nest box as a hunting platform. But even locating the bluebird nest box in an ideal setting does not alleviate the risk of house sparrows or house wrens from confiscating the box. And there are terrestrial predators as well.

Raccoons, snakes, even the common house cat can easily access a free meal at an active bluebird nest, especially if the nest box is located on a tree or wooden post. The best method for a bluebird landlord to avert trouble is by monitoring the nest box every 7 to 10 days. This should be routine whether you have one bluebird nest box or several dozen along a trail. Your efforts will truly be rewarded as you successfully host one of the most beautiful birds that have come to live among us.

Wingtip: Although bluebirds are relatively easy to attract to nest boxes in open rural settings and on the fringes of urbanized areas with open tracts of land or small acreage size lots, the goal is to return them to the interior of communities with large city parks where they once flourished prior to the rapid escalation of the house sparrow population.

For more information on attracting bluebirds ask the staff at the Wild Bird Habitat Store’s of Nebraska. More resources are provided at:
Bluebirds Across Nebraska or Sialis