What a joy it is to attract the Rose-breasted Grosbeak to our feeders after they have wintered in Central and South America. This little finch, which weighs about 1-3/4 ounce, has had a long trip to its 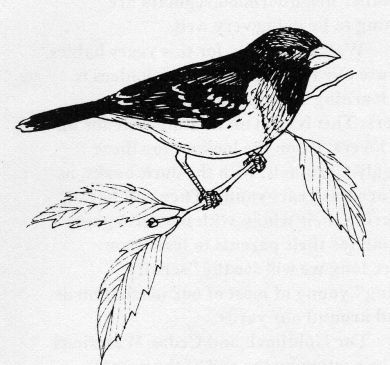 nesting territory. The Nature Center has banded these birds in past years and it is always exciting to recapture one. Some had been banded three years prior to them being caught in the mist nests once again. This truly makes one contemplate the wonders of bird migration when this little bird has traveled all those miles down to the tropics and back, returning to the exact location where it was hatched.
The adult is 8 inches long. While the male Rose-breasted Grosbeak is easily identified with its bold pattern of black, white, and bright rosy breast, the drab, striped female is more of a challenge. She resembles a large sparrow or finch with her large pale bill, dark grey upper parts, a white stripe over the eye, streaked under parts and yellowish wing linings. The male on the other hand has a black head, wings and upper parts and a bright rose-red patch on its breast; the wings have white patches and rose red linings.

The Rose-breasted Grosbeak is a Neo-tropical bird whose summer range stretches across the eastern two thirds of Canada, down through the Great Plains to northern Oklahoma, and east to the Atlantic coast. They occasionally are seen in the mountains of Northern Georgia. They winter from central Mexico through Central America and into Peru, Venezuela, and northern South America.

As soon as the males return they begin singing their lovely song. It resembles that of a robin, but much more refined. Each will defend a territory up to two acres, permitting other male grosbeaks to stop and feed as long as they do not sing. If they do start to sing they are immediately escorted out of the territorial boundary. They females arrive shortly after the male and, if they hit it off as a couple, nest building soon begins. The females will be proud of this father figure they have joined up with as often the male does all the nest building. She will assist him by supplying construction materials of twigs and sticks. That’s not all either. The male Rose-breasted Grosbeak goes beyond the duties of simply building the nest. He will also share the duties of incubating the eggs, and feeding the young nestlings.

The nest is a loose, open cup of sticks and twigs lined with grasses, decayed leaves, or hair and located in a small tree, dense shrub, or thick vines. When the nest is completed the female will lay a clutch of 1 to 5 eggs which are pale green or blue with reddish brown blotches and speckles. It will take twelve to fourteen days of incubation before they hatch. At first they are helpless, eyes closed, and sparsely covered with down. These youngsters will be brood in the nest for the first week or so with both the male and female feeding and tending to them. They will fledge from the nest in nine to twelve days and both adults will continue to feed them. That is unless the female begins construction on a second nest. If she does the male will graciously and dutifully take charge of rearing the newly fledged birds.

The Rose-breasted Grosbeak prefers open deciduous woodlands close to water, thick brushy areas with large trees near open areas, marsh borders, woody over grown pastures and orchards, dense stands of small trees, woodland edges. They nest in tangles and thickets much like the Northern Cardinal. But unlike his cousin grosbeak, the Cardinal, they prefer a much more wooded rural area. Many folks in urban areas may only see them stop by the backyard feeders during migration, but if you’re lucky enough to live near a riparian stream running through your community, you may have them throughout the summer months.

In rural settings they will take advantage of the supplemental foods in the bird feeders all summer. As with Cardinals, Evening Grosbeaks and Blue Grosbeaks, the Rose-breasted Grosbeak prefers to feed from platform, ground, and hopper type bird feeders. They will come to a seed tube bird feeder if it has an attached tray for them to perch on. Sunflower seed and Safflower seed seem to work best at attracting the grosbeak family.

In late summer the post nuptial molt takes place. At this time the male will lose his beautiful colors and become quite drab. This is referred to as “basic plumage.” He will no longer sport his black back, white belly, and rosy breast as he wore when in his “breeding plumage.” Gone also until next spring will be the loud, clear song which is such a joy for us to hear. Migration for these birds begins in September as they take a long, lazy trek back to the tropics.

Wingtips:
The succession of trees spreading into the Great Plains due to lack of fire as a prairie management tool has allowed the Rose-breasted Grosbeak to extend its range westwards where they have hybridized with the Black-headed Grosbeak subspecies as a consequence.

• The name “grosbeak” is from the French word grosbec which means “large beak.”
• The nest of the Rose-breasted Grosbeak is so thinly constructed that eggs often can be seen from below through the nest.
• A group of grosbeaks are collectively known as a “gross” of grosbeaks.
• The male Rose-breasted Grosbeak participates in incubation of the eggs, accounting for about 1/3 of the time during the day (the female incubates overnight).
• Males sing from nest while incubating or brooding, and occasionally sing at night.
• Unlike most songbird species, the female is known to sing. Her song is softer and shorter than the male’s.
• Both sexes sing quietly to each other when they exchange places.
• The Rose-breasted Grosbeak’s song is like that of the robin, only as sung by an opera singer, being mellower and more sweetly melodic.