The diminutive House Wrens are one our most entertaining and longed for birds of the spring by most backyard bird enthusiasts… Their excited antics, and the 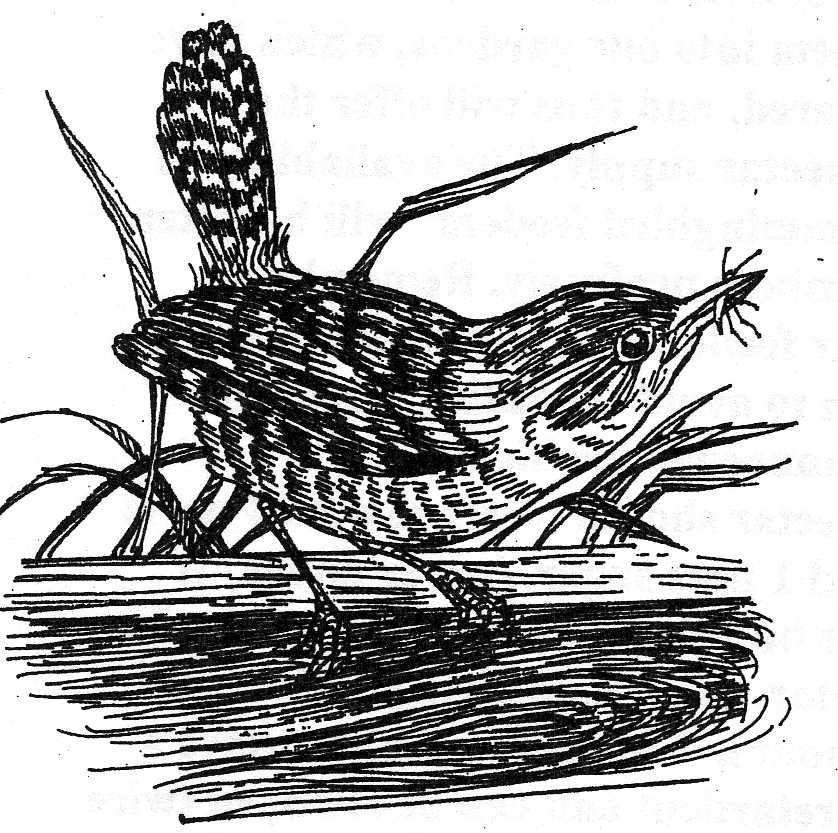 male’s bubbly enthusiastic song, are cherished by many.  It is the most widely dispersed Wren in the western hemisphere with subspecies nesting as far south as Brazil. Their habitat varies greatly but the common feature is trees, shrubs, and tangles mixed with open areas. They are common around buildings, farms, and backyards where there are many nooks and crannies to provide nesting quarters.

The House Wren is a small, brown bird with few readily apparent field marks. It is slender and gray-brown, lighter in color overall and with a longer tail than some other wrens. Its wings and tail are mottled, but its back and belly are fairly clear. It has the trade mark as other wrens of the uplifted tail. House wrens are smaller than the Carolina Wren. They are approximately five inches in length with a wing span of six inches weighing slightly under a half ounce.

House Wrens generally arrive about mid-April in Midwest and Plains states. The male will precede the female by a week or more and probably have a territory well defined by the time she arrives. She may be treated as another male, at first, but when she doesn’t leave after a few attacks he seems to figure out who she really is. The male fills up anything that might resemble a nesting space with small straight sticks. This might include as many as six or seven “homes” ready for her finicky inspection. These possible nesting spots may include a mail box, empty boot, pant pocket, clothesline pipe, tool box, woodpecker hole, nest box or any other cavity he might deem suitable as a home. He will try to coax her into any of these abodes, but she will have the final say. When the female starts to carry soft material into the selected nest, feathers, grasses and other plant material, animal hair, spider egg sacs, string, snakeskin, and discarded plastic, it will be certain her decision has been made.

The female will lay a clutch of 3 to 10 small eggs that are pinkish-white, or grayish, speckled or blotched with reddish brown. Once the clutch is complete she will incubate them for 9 to 15 days. Once the chicks have hatched, they will remain in the nest for another 16 to 17 days before they are ready to fledge. If you are fortunate enough to see the exiting of these little ones, they will fly a short distance to a shrub or other cover and seem to melt away into the background. The parents continue to feed them for about 2 more weeks before they are left to forage on their own. Many times it is the male who will assume the chore of feeding the newly fledged brood while the female starts a second nest.

House Wrens will feed on a wide variety of insects and spiders, including beetles, caterpillars, earwigs, and daddy longlegs, as well as smaller numbers of more mobile insects such as flies, leafhoppers, and springtails. Also eats snail shells, probably for the calcium they contain and to provide grit for digestion. They can be seen foraging for insects in the lower braches of trees and shrubs. Occasionally they will make quick flights over open ground inspecting for insects followed by short hops on the ground to collect their prizes.

Pairs of House Wrens usually break up by the end of each nesting season and will choose a partner the next spring. House Wrens are aggressive. Single males sometimes compete for females even after a pair has begun nesting. In about half of these contests the outsider succeeds in displacing his rival, at which point he usually discards any existing eggs or nestlings and begins a new family with the female.

One event that disturbs ornithologists, as well as many folks that have set up Bluebird nesting boxes, is that the male House Wren can occasionally become bent on destroying all other eggs in his territory which is usually less than a quarter acre. He may even pluck young nestlings from another birds nest and drop them to the ground. The reason for this behavior may be his concern for a lack of available food needed in raising their own young. However, when this does happen, few other birds will escape his wrath. Chipping Sparrows, Chickadees, Robins, Bluebirds, Cardinals, and even other neighboring Wrens will not escape his persecution. Whatever it is that motivates this action, it has been going on a long time and the real reason remains a mystery. 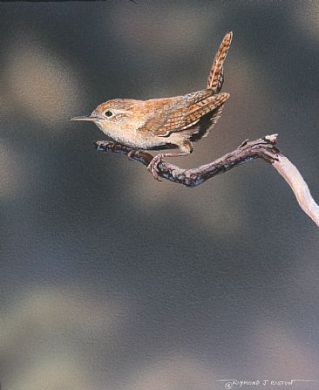 • The House Wren has one of the largest ranges of any songbird in the New World. It breeds from Canada through the West Indies and Central America, southward to the southernmost point of South America.
• House Wrens nest inside tree holes and nest boxes. As the season progresses their nests can become infested with mites and other parasites that feed on the wren nestlings. Perhaps to fight this problem, wrens often add spider egg sacs into the materials they build their nests from. In lab studies, once the spiders hatched, they helped the wrens by devouring the nest parasites.
• A House Wren weighs about as much as two quarters, but it’s a fierce competitor for nest holes. Wrens will harass and peck at much larger birds, sometimes dragging eggs and young out of a nest site they want – even occasionally killing adult birds. In some areas they are the main source of nest failure for bluebirds, Tree Swallows, Prothonotary Warblers, and chickadees.
• For House Wren eggs, temperature inside the nest box can be critical to survival. If a sun-drenched nest box warms above about 106 degrees Fahrenheit for an hour, the eggs will begin to die. If a cold snap chills a nest below about 65 degrees Fahrenheit for more than a day it can also doom the eggs.
• Male House Wrens returning north to breed in their first year are more likely to settle close to an established male than farther from it. Experienced males tend to settle farther apart. Young males may take clues from more experienced males about what areas are good nesting sites.
• The oldest known House Wren was nine years old.

Wingtip: The House Wren is one of the easiest birds to attract to a neighborhood backyard. Although they will only use one nesting site, several boxes seem to attract them better than one lone house. Again this is due to the male House Wren constructing numerous nests for his mate to choose from. With all of the excitement that House Wrens bring to one’s backyard, along with their obvious faults, they are still a “most wanted” bird in most yards across this great land of ours.