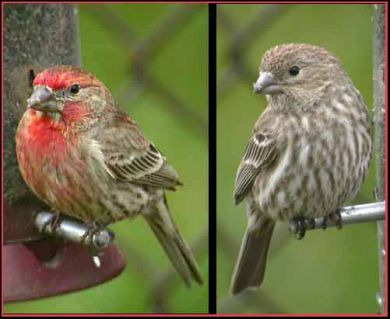 The House Finch, a now common bird that visits bird feeders throughout the Eastern, Midwestern, and Central Great Plains states, is actually a western bird species that was introduced from California into Long Island, NY by caged bird dealers around 1940. They were being sold in the pet trade as Hollywood Linnets, or Hollywood Finch since many were captured around the Los Angeles area. When the U.S. Fish and Wildlife Service found out agents put a stop to it. House Finches are federally protected birds and the trapping and attempted selling of these birds was highly illegal. Heavy fines and jail terms were threatened, so those in possession of these birds turned them loose. The hardy ones made it through the cold New England winters and by 1972 the numbers were exploding all over the East. This type of growth has continued and by about 1985 they were crossing the Mississippi River. As many of you know this bird is now abundant throughout the Midwest and Great Plains States.

Adults have a long, square-tipped brown tail with a shallow notch. Their primary color is a brown or dull-brown across the back with some gray shading on the wing feathers. The breast, belly, and flanks are lighter in color with blurred gray striping.

Male House Finches have reddish heads that extends down the breast, and often on the back between the wings down to the rump. The tone of the red can vary from male to male as a deep red, to an orangey red, to a pinkish hue depending on the seasonal diet of the berries and seeds they feed on. Female House Finches lack this red coloration. They are brown and gray with noticeable streaking on the belly, breast and head.

Often time’s folks believe that when they see a male House Finch sporting a deep red coloring they think it is a Purple Finch. The House Finch has become a common permanent resident whereas Purple Finch are a northern bird that irregularly visit our area during the winter months in what is referred to as an irruption. Close observation is needed, but the differences between these two finches are noticeable. The male Purple Finch is a more raspberry color mixing into a brown back and white belly. In fact the late Roger Tory Peterson referred to them “as a sparrow dipped in raspberry juice”. The female Purple Finch again lacks the coloration of the male, but the stripping on the breast is much bolder than that of the female House Finch with more distinct facial marking including a whitish eyebrow and dark line on the sides of her throat. Purple Finches are slightly larger than the House Finch with a broader wingspan.

The House Finch has some peculiar habits when it comes to choosing a nest site. They have been found building their nests in window awnings, wreaths, hanging baskets, bird houses and I’ll bet you can add a number of even stranger places. One consistent feature is wherever they construct their nest; it is covered from above by an eave, porch roof, or other The nest is built by the female, sometimes in as little as two days. It is well made cup shaped nest constructed of thin twigs, plant stems, leaves and roots. You may also find string and feathers in the mix. The interior of the nest is then lined with fine grasses. Once constructed, the female House Finch will lay about 4 or 5 eggs that have a pale bluish green glossy surface with a few black spots. She will incubate the clutch for 12 to 14 days. The male often feeds her on the nest. Since their food supply consists of 85% or more of seeds and berries, he offers her a regurgitated partially digested mixture. This is the same nutritious diet they feed to their young. Once hatched, the babies will remain in the nest for 10-12 more days before they fledge. Once they have left the nest they are often tended to for a week or more by their parents until they can feed themselves. The young can be very noisy around the feeding area as they beg for food from their parents with fluttering wings.

The House Finches are an entertaining bird species to have in ones backyard. The male House Finch has a lovely, joyful song which everyone enjoys. It can be rapid with a cheery warble or a variety of chirps as though carrying on a conversation with his comrades.