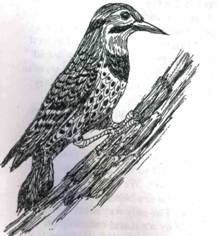 The Northern Flicker is one of the largest and most beautiful woodpeckers in North America. We receive numerous calls each year along with customers stopping by Wild Bird Habitat asking about this bird that they occasionally see in their yards. It does not frequent feeders and bird baths as often as other woodpeckers, but when it appears the shear size of this bird makes it very noticeable and a joy to see.

Northern Flickers are large, brown woodpeckers with attractive black-scalloped plumage and black bars on the wings. They have a noticeable black patch on the upper breast below the throat resembling a bib while the lower breast and belly are beige with black spots. Male Flickers have marking on each side of the face referred to as a mustache. Females lack these marks. If the markings are black it is a Yellow-shafted Flicker more common in the Eastern United States. If they are red it is a Red-shafted Flicker a western bird. These colors may also be noticeable as a flash of yellow or red in the wings when they fly. Both have a white rump under a brown tail that is very conspicuous in flight.

Their size is impressive weighing just under a half pound. Flickers are eleven inches to just over a foot long with a wingspan up to 20 inches. The long bill is slightly curved downward and is used for digging ants and beetles out of the ground.

Northern Flickers do not act like typical woodpeckers. They mainly forage on the ground often seen among sparrows and blackbirds. When you see a Flicker in a tree they will be perched in an upright stance on thin horizontal branches. Other woodpeckers cling to branches or tree trucks using their tail for leverage. Neither do they fly in rapid undulating patterns as other woodpeckers. They will rise and drop smoothly as they alternate flapping their wings then gliding.

Flickers inhabit a number of different habitats from deep woodlands to woodland edges, open fields with scattered trees to riparian woods and wetland edges. They are found in both rural areas and urban settings often seen in city parks and at backyard bird feeders and bird baths. As with other woodpeckers they are primary cavity nesting birds preferring to excavate a new dwelling every year. Last years woodpecker holes are generally inhabited by secondary cavity nesters the following year such as bluebirds, Chickadees, nuthatches and wrens. Flickers can also be attracted to man made nest boxes. These Flicker boxes need to be packed tight with sawdust. This gives the bird the satisfaction of seeming to excavate the decaying heartwood of a tree trunk or large branch. Woodpeckers only excavate new holes in dead trees or dead branches on a tree. Thus the removal of dead timber has had an impact on many woodpecker species and subsequently the secondary cavity nesting birds.

Courtship begins in early spring. Rival males may face off in a display sometimes called a “fencing duel,” while a prospective mate looks on. The two males will face each other on a branch, bills pointed upward, and bob their heads in time while drawing a loop or figure-eight pattern in the air, often giving rhythmic wicka calls at the same time. Once a mate has been established a nesting site will be determined.

The nesting of these birds is also an interesting procedure as well. The nest hole can be from 2 to 80 feet high, and as stated earlier, in a dead snag or dead tree branch. The male has a lot to say in the location of the nest, but both the male and female share in the drilling out of the cavity. The opening is three inches in diameter with the cavity 13” to 16” deep becoming wider at the bottom. They leave a layer of fresh chips in the bottom, which forms the nest to hold the clutch of eggs.

Once the nesting cavity has been completed the female will lay 5 to 10 all white eggs. She will incubate the clutch during the day with the male taking the night shift for 11 to 13 days. Once the eggs have hatched the young birds will remain in the nest for another 24 to 27 days. After about 17 days the young Flickers will cling to the inside walls of the cavity rather than lying on the floor. Both parents will feed the nestlings until they fledge from the nest, and continue to feed them for a period of time until they are on their own.

While other woodpeckers forage for insects and larvae in the cracks and crevices of trees, Flickers forage for insects on the ground with 75% of their diet consisting of animal matter, the majority of which are ants. You can watch them working an ant hill with great vigor. The long tongue is driven deep in the holes and the ants are drawn up in great numbers because of its sticky consistency. The balance of their diet consists of fruit, ripe berries and seeds usually during the winter months. At backyard bird feeders they will feed on hulled sunflower seeds, shelled peanuts, and suet. While they can cling and maneuver on most every type of bird feeder to get their fare, I have a large platform feeder with sunflower hearts where they seem to prefer plopping down enjoying a relaxing meal. They will often stab at intruders with their long bill, driving them off until they have had their fill.

Open water during these winter months seems to attract them almost more than the backyard bird feeders do. Most reports we receive are Flickers visiting a bird bath. I have a 16 foot shallow stream between two small reservoirs in my backyard running over two waterfalls, even at thirty below windshield temperatures. You can just about count on multiple daily visits by a Flicker, and each time it is just as exciting as the last. At a recent bird feeding workshop we conducted in Columbus for the Central Community College Extended Learning Services, several attendees asked about witnessing these large birds at their bird baths. It was the Flicker.

This is one of the reasons Wild Bird Habitat publishes a monthly newsletter and has a trained staff to help with your questions. It is to encourage and assist people to learn through observation by watching the birds that come to their backyards. Enjoying them, identifying them, and becoming familiar with individual birds and their personal habits. Further Wild Bird Habitat encourages everyone to take a few moments and count the birds they see. You can report your findings during the Christmas Bird Count, the Great Backyard Bird Count, Project Feeder Watch, or through E-Bird. Any one can become a citizen scientist. From children to adults, no matter what you’re level of birding experience.
Good birding to all from the staff at the Wild Bird Habitat Stores.

Fun Flicker Facts:
• Like most woodpeckers, Northern Flickers drum on objects as a form of communication and territory defense. In such cases, the object is to make as loud a noise as possible, and that’s why woodpeckers sometimes drum on metal objects.
• The Northern Flicker is one of the few North American woodpeckers that is strongly migratory. Flickers in the northern parts of their range move south for the winter, although a few individuals often remain far to the north. They are permanent residents across much of the U.S.
• The red-shafted and yellow-shafted forms of the Northern Flicker formerly were considered different species. The two forms hybridize extensively in a wide zone from Alaska to the panhandle of Texas. A hybrid often has some traits from each of the two forms.
• The population of Flickers is widespread but there are signs their populations are declining. This is most likely due to loss of habitat from deforestation, forest fragmentation, and removal of dead standing timber. This habitat loss will eventually impact secondary cavity nesters even though some of those affects are already evident. The result of human activity over the past fifty years has resulted in a loss of half the world’s bird populations.