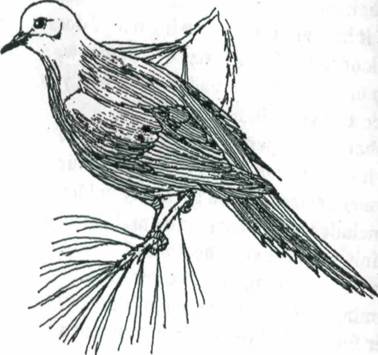 In the spring and early summer, we may have noticed a bird with a stiff flap and glide flight pattern, reminiscent of a Sharp Shinned Hawk. But closer inspection reveals the male Mourning Dove in a courtship flight, then returning to his favorite “cooing” perch. In flight he has a whistling sound as doves often do. However they are capable of quite flights as well. Watching the courtship it might appear strange. The male flies at the female and she quickly moves ahead, as if to avoid his advances. This, however, is how she may be choosing her potential mate. If he persists long enough, she may pick him as her partner simply because of his “never give up” attitude. They will remain together forming a monogamous relationship unless one of the pair dies. At that time the other will search out a new mate.

The Mourning Dove populates most all of the United States down into Mexico and well into Northeastern and Northwestern Canada. They are considered partial migrants. While some Mourning Doves drift south for the winter while others may choose to remain in more Central and Northern areas if a food source is abundant.

Mourning Doves are smaller than the common Pigeon measuring 12 inches in length with a wingspan of nearly 18 inches. The male weighs about 6 ounces with the female weighing slightly less. Both have a blended grey and brown body leading to a mostly gray head especially on the crown. Mourning Doves have black spots below and behind their eyes with smaller black spots on the wings. The tail is long tapering toward the end. The white edging along the sides of the tail is noticeable in flight.

Mourning Doves are among the earliest nesters of all our songbirds in the Central Plaines and Midwest. The first attempt to nest might be as early as late March and continuing into September. Early on the male defends a territory up to one hundred yards in diameter. But as time passes, these territories diminish in size to just a few yards. In fact territories may grow so small during the summer that it is not uncommon for several doves to nest in the same tree.

The nest is a flimsy affair which is often built on the boughs of an evergreen. They will also use Cotton Woods and other deciduous trees and bushes once they have leafed out. Some folks have be lucky enough to have had doves nest in a hanging basket where they were able to watch the young grow and fledge.

Although the male will select the location for the nest, anywhere from three to thirty feet off the ground, it is the female that will construct it. She builds a loosely designed structure with twigs passed to her from the male while he often will stand on her back to do so. The completed nest is so scantly built you can actually see the eggs in the nest looking up from underneath it. It will take about four days before the 8” diameter nest is finished and ready to occupy. It has the appearance of being slightly funnel shaped.

The female Mourning Dove lays only two white eggs per nesting. For this reason it is amazing the dove population has remained as stable as it has since they are the most popular bird to hunt with over 20 million birds harvested annually. Both parents will incubate the two eggs with the male taking the day shift and the female on nights. They will continuously rotate, constantly incubating the eggs until they hatch in fourteen to fifteen days. It will be another two weeks before the young birds are ready to leave the nest.

During this nesting phase the adults will feed their young “pigeon’s milk”, a regurgitated, partially digested gruel of seeds. Once they have fledged the nest they will feed on a variety of seeds swallowing them whole. Doves feed primarily on the ground foraging for seeds but occasionally may land on a platform bird feeder for a meal. They can consume almost a quarter of their weight in seeds daily but will feed on berries as well.

Wingtip: Doves consume large quantities of seeds found on the ground. These seeds are stored in a crop located in the birds esophagus where they are digested. The Cornell Bird Lab reports the contents of one dove’s crop contained 17,200 bluegrass seeds.

Why do Mourning Doves make a distinctive sound when they fly off?

Unlike other birds which take to flight silently, Mourning Doves make a very distinctive whistling sound which is clearly heard each time they fly off. The reason is that taking off takes a lot of effort faster wing beats and different angulation of the wings than in level flight the wings have to almost touch on upbeat and down beat and the speed of the wing flap is so fast that their legs have to propel them up before the wings come down on the bottom of the down stroke with the air pressure the end primary feathers distort and on the up stroke at top come apart and the air escapes this creates the whirring sounds we know so well.

·Mourning Doves will eat as much as12 to 20 percent of their body weight daily, averaging roughly 71 calories.

·The Mourning Dove is the most widespread and abundant game bird in North America. Every year hunters harvest more than 20 million, but the Mourning Dove remains one of our most abundant birds with a U.S. population estimated at 350 million.

·During the breeding season, you might see three Mourning Doves flying in tight formation, one after another. This is a form of social display. Typically the bird in the lead is the male of a mated pair. The second bird is an unmated male chasing his rival from the area where he hopes to nest. The third is the female of the mated pair, which seems to go along for the ride.

· Mourning Doves forage on the ground, and in heavily hunted areas they may inadvertently eat fallen lead shot causing lead poisoning. It has been reported doves have eaten up to 43 pellets. Studies have found this problem is worst around fields specifically planted to attract the doves, and that about 1 in 20 doves ingest lead pellets.