If ever there were a bird that arrived in our backyards in preparation for the winter acting almost as happy to see us as we them, it is the Red-breasted Nuthatches. During the summer 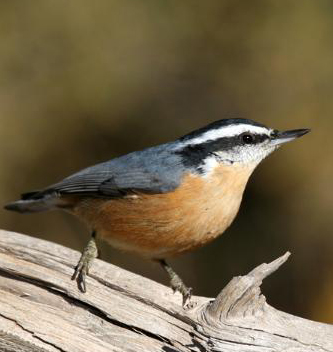 these little dynamos live in northern and western coniferous forests of spruce, fir, pine, hemlock, and western red cedar including the coniferous bluffs and canyons of Nebraska’s Pine Ridge and Wild Cat Hills. In the east along the Appalachian Mountains they will use deciduous forests of birch, Poplar, oak and maple.

They typically begin to arrive in the Northern and Central Great Plains and Midwest by late September to spend the winter months, but just how many will arrive depends on several factors. The mass irruptions of these “Northern Birds ” is thought to be either a great number of birds were fledged or there is a lack of natural food supply in their normal range. The truth may be either reason or a combination of both. Since it has been extremely dry in the northern forests I hope we see good numbers of Red-breasted Nuthatches in our backyards this winter.

Red-breasted Nuthatches are small compact birds slightly over 4 inches long weighing approximately ¾ of an ounce. Their length includes the nearly ¾” pointed bill. Their head sits atop a broad body with a very short thick neck. This broad body supports a very short tail and short broad wings. They are a blue-gray bird with distinct patterns on the head. Look for a black cap with a black stripe through the eye that is broken with a white stripe over and below the eye. The name Red-breasted Nuthatch comes from the rusty red under parts which is paler in the female.

During the summer months Red-breasted Nuthatches feed on insects such as beetles, caterpillars, spiders, flies, and ants. Insects are the primary diet fed to their nestlings. But as fall and winter reduces the number of insects available they will feed on a variety of tree seeds including those which they cached away the previous year.

and wedge them into the bark of trees where they hammer them open with their sharp pointed beak. They will also store seeds, as well as insects, into the crevices of tree bark. One year I noticed a number of little white dots in the coarse bark of a hackberry tree in my yard where a nuthatch had stashed a supply of safflower seed.

These Nuthatches seems to start their courtship as early as March, but nesting is more likely in May. Some Ornithologists feel that at least some of these birds remain mated year around. Given the remoteness of their breeding territories I guess there is much to learn about the general habits of this diminutive rascal. Several years ago I had a pair of Red-breasted Nuthatches take an interest in a Chickadee nest box and began to place materials in it. However, by May they had disappeared probably retreating to their nesting range to the north. But for the past couple of seasons we have received reports of people having nesting pairs during the summer in the Lincoln area. I guess that if the habitat is available along with a good food supply some may feel there is no need to make the long journey north to nest.

The female Red-breasted Nuthatches usually select the nest site in a dead tree or dead limbs on a tree. At that time both sexes will excavate the hole with the female doing most the work as the male feeds her. It will take them up to 18 days. However males without mates may begin excavating several cavities at once in an attempt to attract a female. Other than woodpeckers they are among the few birds that will excavate their own nest. It is generally the female who creates the nest cavity while the male feeds her.

This nuthatch will excavate a new nest cavity each year or perhaps use a discarded woodpecker hole or occasionally a nest box. When excavating a new nest they will dig out a rotting stump or branch as low as several feet above the ground or as high as eighty feet or more. But the average nest seems to be twelve to fifteen feet up. They line the nest with soft material, including fine strips of bark.

There are several unusual characteristics about the nest of the Red-breasted Nuthatch. When they excavate their own, the hole slants downward for three to four inches and then shoots straight down another four inches. There is an even more peculiar habit. Both the male and female carry pitch, a sticky gummy substance, and apply the gooey stuff completely around the entrance hole several inches wide. They will use a piece of bark to do this. This is a great demonstration of the use of tools by birds. This seemingly is used to discourage predators such as snakes, raccoons, and squirrels from bothering the eggs and young. The Nuthatches themselves deftly avoid this trap by flying straight into the hole. They continue to freshen this pitch until the young leave the nest.

The female will lay two to eight white, creamy, or pinkish white and speckled with reddish brown eggs. The average clutch is five to six eggs. These eggs will hatch in twelve days and in eighteen to twenty one days the young will fledge.

Red-breasted Nuthatches are quick on the move, scurrying in any direction around a tree trunk. Nuthatches are often seen zigzagging down a tree head first giving them the name the “up-side down” bird. They can become aggressive towards other birds including larger birds at the bird feeders but in turn will form a feeding flock by joining up with Downey Woodpeckers and Chickadees. When they fly it is usually a short distance in an undulating pattern much like a woodpecker. They have an unmistakable high nasally “yank” “yank” call as a toy soldier with a tin horn might sound like. Agitated males will point their beaks up and with fluttering wings and swaying bodies call to each other.

This bird almost appears to be tame probably due to the lack of human encounters in their remote nesting territories. Don’t be surprised if this little bundle of energy doesn’t land on your feeder to collect a seed while you’re attempting to fill it. They show very little fear of us. One pleasant December day I had the doors to our north Lincoln location open and a Red-breasted Nuthatch would fly in, take sunflower seeds from a display, and go outback to the deck where he wedged them into a crack and hammered them open. The half dozen customers in the store really enjoyed his antics, but it did not seem to matter to him one bit. We had one report where as a woman was on her way to fill her feeders, a Red-breasted Nuthatch lit on her eyeglasses to ride out to the feeders with her.

Red-breasted Nuthatches are a common bird throughout its range and their populations seem to be increasing. But as for all cavity nesting birds it’s important we leave some dead wood (dead trees or dead parts of trees) standing in forests and woodlots to provide places for nests.

I really hope we are blessed this winter with flocks of Red-breasted Nuthatches. Some years they can be plentiful while others somewhat sparse. One thing is for certain though. It makes going out to fill the feeders on a cold winter’s morning just a little bit less chilly when they are around greeting us.

Wingtip: Red-breasted Nuthatches are short-distance migrants. Those in the far north move south. Some years they can be irruptive moving south in great numbers when food production is low. This irruption seems to go on two year cycles. Sometimes they may go as far south as the Gulf Coast.