The Downy Woodpecker is a permanent resident bird. They are well established in older neighborhoods with mature trees and the first of our woodpeckers to show up in a developing neighborhood. It is

not only the most common and prevalent woodpecker in this area, but is also the smallest of our North American woodpecker species. Adults are mainly black on the upper parts and wings, with a white back, throat and belly, and white spotting on the wings. There is a white bar above and below the eyes. They have a black tail with white outer feathers that are barred with black. Adult males have a red patch on the back of the head. The male can be distinguished from the female at any age by this red patch. The female Downy is strictly black and white. You probably know by now how easy it is to attract them to suet feeders, and bird feeders stocked with sunflower or peanuts. They are very trusting of humans. One can easily approach them while they are visiting the feeding stations. They look very much like a distant relative of the Hairy Woodpecker and are virtually identical in plumage pattern, but these two species are not closely related at all. In fact the Downy Woodpecker is more closely related to the Ladder-back species which is found in the southwest part of the country. The most noticeable difference between the features of the Downy and Hairy Woodpeckers is the Downy is smaller in size by 3”, and a beak half the size of their head. The Hairy’s beak is as long as its head. It is certainly interesting to note that these two species exploit rather differently-sized foodstuffs and generally do not compete very much ecologically. They may however battle over who has the right to the suet feeder.

This small woodpecker is pretty much a loner during much of the year. It often travels with other small birds during the winter months in what are called loose flocks. Lone Downy Woodpeckers will travel around with Chickadees, nuthatches and Tufted Titmice in winter. These birds established feeding territories in the early fall comprised of both natural foods and supplemental foods provided in bird feeders, and follow each other around in feeding teams exploiting those resources. Then, in late winter, the Downy’s interest shifts to his mate or prospective mate and the drumming begins.

Woodpeckers drum for several reasons. One is to announce their territory to other woodpeckers in the area. Once they selected a tree trunk, telephone pole, metal furnace flue on a house, or even gutters where their drumming resonates satisfactorily, they will return frequently to make their territorial announcement. This is also used to lure their mate. The drumming of woodpeckers is also heard as they excavate a new nest cavity, or in search of food, removing dead bark or driving insects to the surface for a tasty meal. 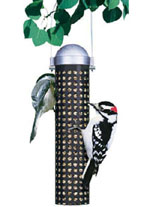 Wingtip: Woodpeckers have a tongue that can be up to 6” depending on the species. The tongue is slightly barbed and sticky on the end and is used to extract insects and larvae out of small cracks and crevices. When not in use it coils up much like a spring in the back of their skull.

By late winter or early spring, the mating urge of the male Downy gets serious and these birds will begin to defend a loose nesting territory. Once a mate has been selected they will begin to look for a nesting site. When a site is located, and if the nesting tree is agreed upon, the defense shifts to a small range with the nest as the focal point. There are times when they don’t agree on a nest tree and they simply split up and do not nest together but attempt to find another partner. However, providing all goes well, the male will excavate a new hole, but only in a dead branch or tree trunk. This event takes 5 to 7 days to complete after which the female will then lay 4 to 5 eggs. Incubation will usually start at the completion of the clutch. The pair will trade off on incubation duties, with the male working the night shift. The eggs will hatch in about 12 days, and both parents will brood the young in the nest for about 2 weeks. Again, the male has the overnight watch, but both share in the feeding process. The youngsters fledge about three weeks after hatching and can fly immediately. One feature of interest is if you find an active Downy nest you can tell the age of the young inside. For the first 9 days the adults disappear completely into the nest when feeding. After that and until about the 14th day, you will see the tail of the adult sticking out of the nest hole while transferring food to the chicks. From then on until they fledge the young will meet the adult at the entrance for their food. Both adults will continue to feed the fledglings for several more weeks until the feeding becomes almost confrontational. It is thought this may trigger the separation of the family.

You may notice the young Downy Woodpeckers are much cleaner than their parents when we get to see them for the first time. This is due to the fact the adults have made several hundred trips per day through the nest hole caring for their young which can soil and damage their feathers. These feathers will be replaced during the fall molt prior to winter. Look for the red spot on the head of the young males. It will be on the top of their head until they molt in late summer. After the molt it will be on the back of their head.

Wingtip: Woodpeckers, as with other cavity nesting birds, will use old nest cavities and nest boxes as a winter roost to retreat from harsh weather.