Skip to content
The Song Sparrow is a habitat generalist meaning they are found in a large variety of habitats. These birds occur from arctic grasslands to desert scrub, pine forests, prairie shelterbelts, agricultural fields and overgrown pastures. The favorite 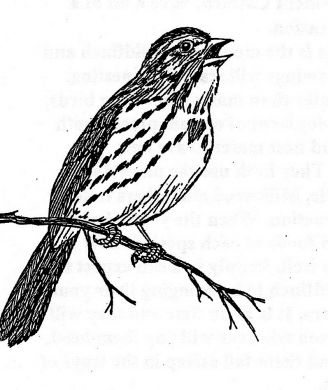 habitats of this delightful sparrow seem to be salt and fresh water marshes, the edges of lakes and forests, and suburbs. They can also be found in urbanized areas foraging for seeds under the bird feeders primarily during the fall and winter months.

Adult song sparrows have brown upper parts with broad dark streaks on the back. The underneath is white with dark streaking and a dark brown spot in the middle of the breast. They have a brown cap and a long brown rounded tail. Their face is grey with a streak through the eye. They range from 4.5 to 6.5 inches with a wingspan of 7 to 9.5 inches and weigh anywhere from a half ounce to almost two ounces. The size variation is due to the number of sub-species of Song Sparrows.

Song Sparrows are resident birds across most of Nebraska but would be considered partial migrants as they roam around during the winter months. Their population spreads into both eastern and western states where they occur year round. Those Song Sparrows, whose summer breeding range is the upper Great Plains and across all of Canada, migrate to southern states for the winter.

The Song Sparrow is one of our really lusty singing birds. The male perches on a prominent branch, throws back his head and lets loose with one of the most enjoyable bird calls to listen to. Some have compared this sparrow’s song with the first three notes of Beethoven’s fifth symphony. Thoreau phrased their call as if they way saying: Maids! Maids! Maids! Hang up your teakettle-ettle-etlle. Whatever your thoughts are it is a pleasant and easily recognizable song.

The male will start singing as soon as he arrives on his territory. He will aggressively attack any other male Song Sparrow as they arrive throughout spring. Where they are permanent residents some males will remain on the old territory during the winter months until spring. When the female arrives he recognizes her as the one who crouches and offers soft twill calls back to him instead of retreating or turning to fight.

When nest construction begins it is the female that will build it. It will take her four days to construct working mainly during the morning hours. The male will assist by bringing various materials and pass them off to her. The nest is an open cup 8” across by 2.5” deep erected with weeds, grass, leaves, and bark, lined with fine grass, rootlets, and hair. They will nest two and sometimes three times each year. The first nest is often built on the ground in dense grasses while subsequent nests may be found in short thick shrubs up to four feet off the ground. They have little fear of human activity and will nest close to houses and in flower beds. Territories of Song Sparrows are small so it is common to find many nests close together.

Once the nest is complete the male becomes decidedly quieter, even being hard to locate close to the nest itself. The parents are very secretive around the nest sight and will land several feet away and approach the nest out of sight. These sparrows are very vulnerable to the Brown-headed Cowbird but since they are in such good numbers they must have developed some way to overcome these parasitic birds.

The female will lay a clutch of 3 to 5 brown spotted greenish-white eggs and incubate them for twelve to thirteen days. Once the eggs hatch she will brood the chicks for another week before they leave the nest, usually in about 10 days, well before they are able to fly. The chicks remain close to the nest and are very quiet for another week. The adult pair often divides the chicks up each being responsible for the same few. But if the female begins a second brood the male will take full responsibility for all the young. Both parents will continue to feed the young birds for another three weeks until they learn to fly well enough to find their own food. But even then the young vigorously pursue the parents loudly begging for food as they flutter along with a tail only half its length.

The diet of Song Sparrows consists of both insects and seeds. In fall and during the winter they mainly feed on seeds while in the spring and summer they turn to feeding on insects. It is a very valuable bird as it eats many pestilent insects along with the seeds of many noxious weeds. They also enjoy various fruits and will come to forage under bird feeders in the fall and winter. Like all of our native sparrows they scratch the ground vigorously for the seeds they ingest both at our
feeding stations and in the wild. 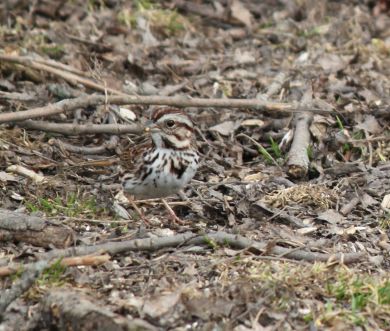 Predators of Song Sparrows include cats, hawks, owls and snakes. This sparrow recognizes enemies by both instinctual and learned patterns and adjusts its future behavior based on both its own experiences with encounters, and from watching other birds interact with predators. Comparisons of experiments on hand-raised birds to observation of birds in the wild suggest that the fear of owls and hawks is instinctual, but fear of cats is learned.

Look for Song Sparrows hopping and walking on the ground or hopping and flittering through low tree branches, grasses and other vegetation. They move about very secretively with the exception of males when they are singing from exposed perches. They sing most of the year and have been known to respond to “pishing”, a sound made by birders to get the attention of birds. In flight they travel short distances between perches or cover with the tail pushing downward.

So if you’re out walking in a park, natural area, or rural setting, listen for this wonderful little bird with its beautiful song and you will understand why it is called the Song Sparrow.